The Stock Decline Begins, is it Corrective or Impulsive?; Euro Reversed - Heading Lower 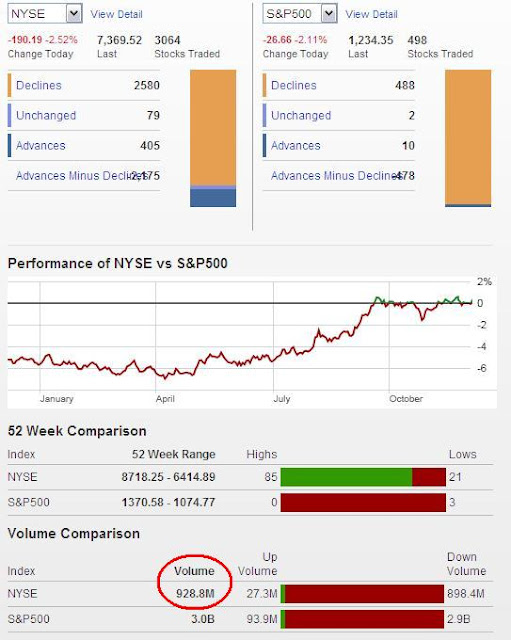 Volume was light relative to normal trading days throughout the eyar but it did kick up a bit relative to the volume that accompanied the recent rally.  It's also some decent volume for a December.  In addition, an overwhelming majority of the volume (96.7%) was to the downside.  So today was a bearish day internally, and in the price action.

Today's action was in line with the projection I gave in Tuesday's post in that a decline was real close, but unfortunately there's not enough evidence to determine whether this decline is just a correction before moving higher, or if it's the start of the next major selling phase to new lows.  The volume and intensity of today's move coincides with either a C wave, or a larger wave 3.  Since today's decline might be a C wave in a flat correction before moving higher, the bullish outlook still remains just as likely as today's decline being the start of another 3rd wave down.  So we're still mixed here in my view, and need to at least see Friday's and Monday's action before getting a better idea of the larger trend.  But I think a slight advantage lies with the bears because there is still a series of lower highs in place, the euro looks very bearish here, and the risk/reward is very appealing to the bears right now. 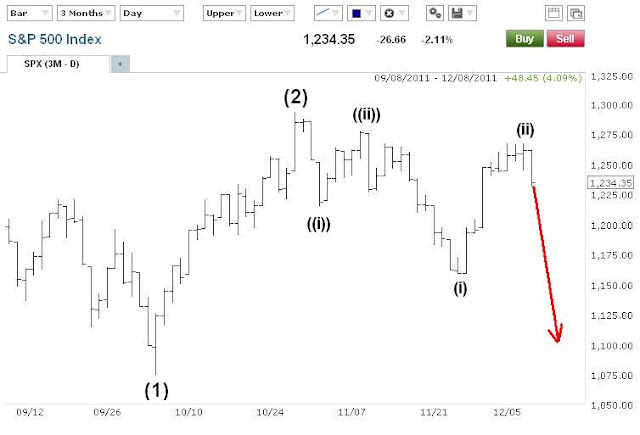 Earlier in the week we saw that the declining volume, mature wave structure, and long candlestick wicks on the daily charts suggested at least a short term pullback was coming soon, and today it came true.  If the above count is correct, the market should be selling off with little rest for the coming weeks.  That may be a tough task to expect for a market heading into a normally positive time of the year.  But we'll see.

Although the evidence for the bears and bulls are almost even here, there is one piece of evidence that lends itself to the bearish camp for stocks.  And that's the action in the euro.  If stocks continue to track the movement of the euro more or less, and the euro has some serious selling pressure on it right now as it seems, then the bearish stock count above looks more likely at this point.  After Friday, and maybe Monday's action, we should have a better idea of the larger trend and wave count. 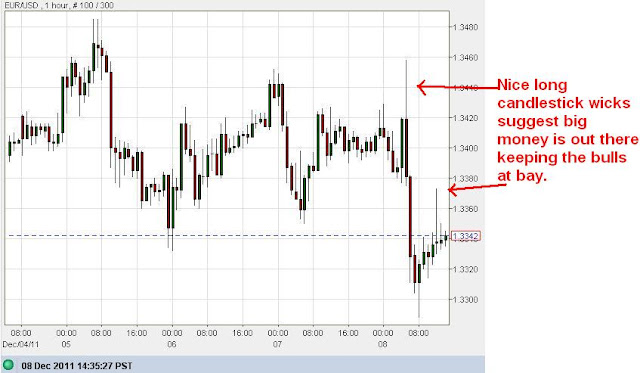 The euro was able to sneak in a new swing high on the hourly chart during the European session but was immediately reversed and sold off to a new swing low.  That type of reversal is extremely bearish.  What's even worse for the bulls is that on the US session's rally later in the trading day, the bears again pushed the bulls down with some heavy money as you can see with the second long wick on the above chart.  These long wicks may mean that some big money is coming in and hammering the euro, preventing it from making any real progress or gaining any momentum.  The bottom line is that the trend remains down and the I remain bearish the euro.  And that's bearish for stocks most likely.


PLEASE NOTE: THIS IS JUST AN ANALYSIS BLOG AND IN NO WAY GUARANTEES OR IMPLIES ANY PROFIT OR GAIN. THE DATA HERE IS MERELY AN EXPRESSED OPINION. TRADE AT YOUR OWN RISK.
4 comments: 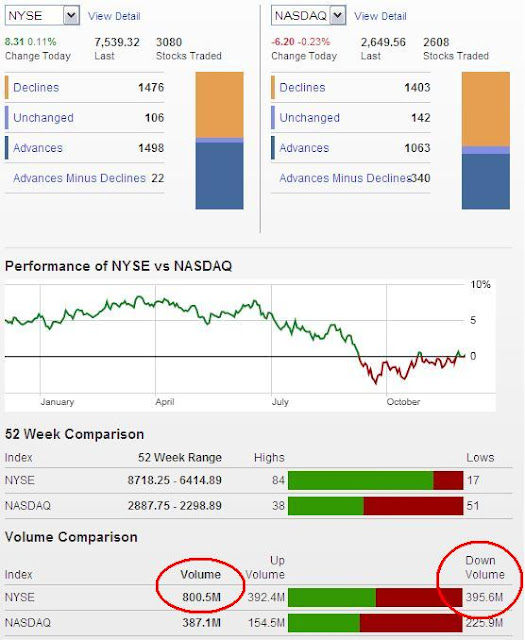 I was hoping by now the market would be tanking hard as projected and I could give my A-Team Hannibal line of how "I love it when a plan comes together."  But unfortunately, I can't.  I'm not putting much emphasis on the market's internals until after the New Year since volume should be light the rest of the month and there's usually a positive bias right now.  You can see that today's 800 million NYSE shares shows you exactly what I mean.  The interesting note here is that volume was slightly tilted to the negative side, despite the Dow posting a decent gain of 52 points at the close.  When you combine this weak internal structure of the rally today to the wave count and daily bars I discuss below, it tells us that at least a short term top might be nearby.  If nothing else, it's a great risk/reward opportunity for the bears since the retracement is so deep and has now come closer to my stop level just above 1277.55.

Single- and Multi-Bar Price Analysis: Could It Help You Forecast the Markets? 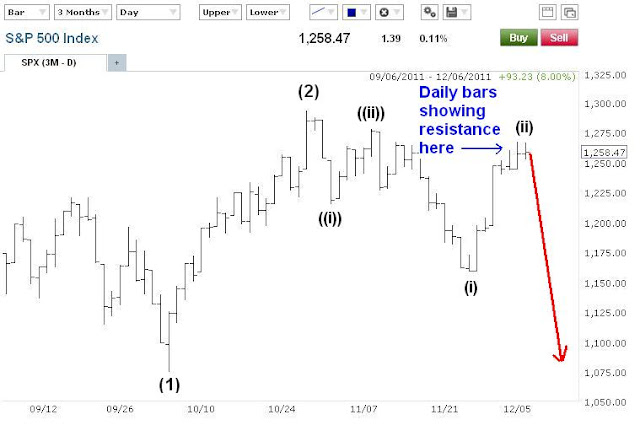 This wave count has become more and more doubtful the past few trading days for two reasons: 1) the smaller degree wave (ii) is much larger than its larger degree wave ((ii)).  This does not violate any EWP rule, but is certainly contrary to EWP guidelines; and 2) the retracement of wave (ii) is very deep, deeper than the usual comfortable level of retracement at 78.6%.  Again this doesn't violate an EWP rule since corrective waves can retrace up to 100% of the preceding move, but the excessive depth of the rally is contrary to EWP guidelines.  So since no rules are violated, the above count is only down, but not out.

One reason I still hold this count as top choice though is that the rally involved governmental interference.  This may interupt the short term gyrations and wave count in the market, but it won't prevent the original larger trend from taking over in the end.  So the two guidelines I mentioned in the previous paragraph have more forgiveness on my part since the wave had government intervention in it.  I know that many wavers disagree with me when I say that external events such as government intervention have an impact on the wave the count at level, but this is just my opinion developed over the past several years of using EWP.  I don't think external influences, such as government intervention, can change the long term trend, I just think it can complicate the short term wave count at times.

If the above count is correct, the market will stay capped at 1277.55.  A move above this level probably means Intermediate wave (2) is not finished and that I'm going to step aside until I see signs of a top again.

One thing to note as we move forward in the coming days.  Looking at the recent rally which I labeled wave (ii), it looks impulsive on the daily chart above.  This of course would mean the labeling in my chart is wrong and that the larger trend is now actually up.  There are some candlesticks with large wicks on the daily charts that have formed the past few trading session which suggest there is strong resistance at current levels so at least a short term pullback is likely coming.  The reason I wanted to mention all this is because we may get some weakness this week but it MAY not be because the downtrend has resumed but actually just a correction of a 5 wave rally.  So it will be important to get a good definitive wave count on the decline to determine if the decline is impulsive or corrective so we'll have more certainty as to the larger trend.

So a lot of "ifs" and "buts" today which is unfortante.  But I try to just write these posts as objective as possible with all the relavent thoughts I have on the market at the time.  And ufnortunately, the past few days has left some uncertainty.  So managing risk, not maximizing profits, is paramount for me this week. 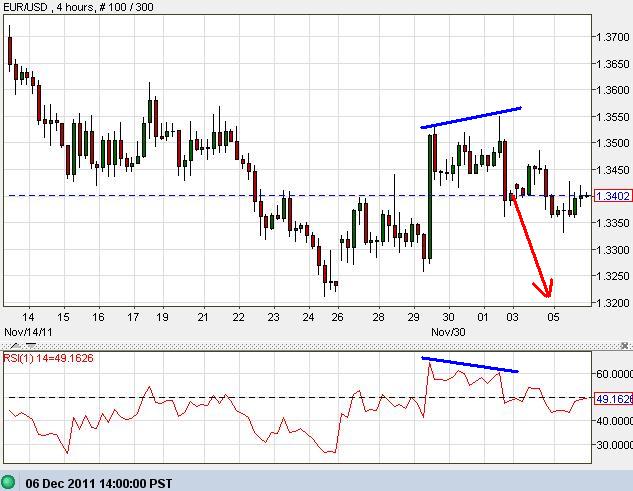 The euro has obeyed my forecast from last week...........wow, I like how that sounds, it "obeyed my forecast".........anyway, it fell lower after that big reversal candlestick on the 4hr chart I pointed out in last post.  However it has been a bit flat since the initial drop.  Nothing concerning at this point for the bears at this point though, but I'd like to see the euro sell off in the near future to be more comfortable with assuming a top is in. 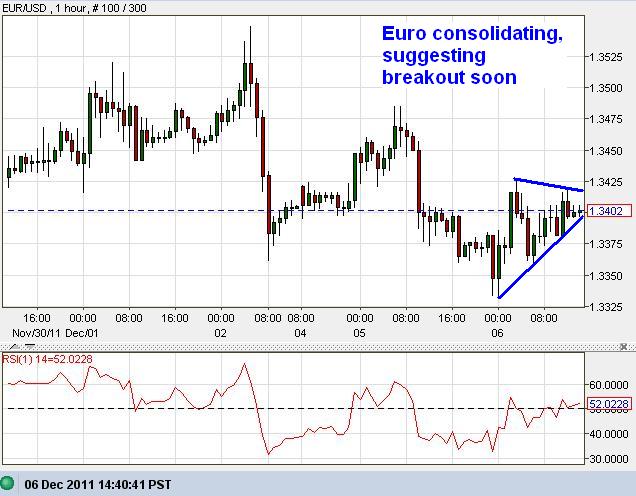 The euro is consolidating on the one hour timeframe.  This means that there is probably going to be a breakout pretty soon, i.e. a sharp and deep move.  Since the euro is not giving us a high confidence wave count, I'm not sure how a consolidation or a triangle would fit in here, and therefore I can't be confident in what direction it will breakout to.  But since it's made a lower high and lower low recently, it could be the start of another major downtrend phase, so I'm not abandoning the bearish outlook due to this currnet triangle like pattern.  I'm just ensuring my stops are in place at comfortable levels because if this thing breaks out against me I want to make sure I'm removed from this market as soon as possible.

The bottom line is that I remain short but have tightened my stop in preparation for the breakout possibly going against me.


PLEASE NOTE: THIS IS JUST AN ANALYSIS BLOG AND IN NO WAY GUARANTEES OR IMPLIES ANY PROFIT OR GAIN. THE DATA HERE IS MERELY AN EXPRESSED OPINION. TRADE AT YOUR OWN RISK.
9 comments:
Newer Posts Older Posts Home
Subscribe to: Posts (Atom)