I'm going on vacation until Sunday so I probably won't post anything until then. Gold did nothing today so the same parameters and stops remain in place. The stock market rallied again today unexpectedly but broke no key levels. Upside should continue tomorrow and perhaps Friday but should be limited and capped at the 875 area. A strong break of 875 S&P futures will cause me to probably scale back about half my S&P short position. In no way will I get long this market until the severely overbought levels of this market are alleviated.
No comments: 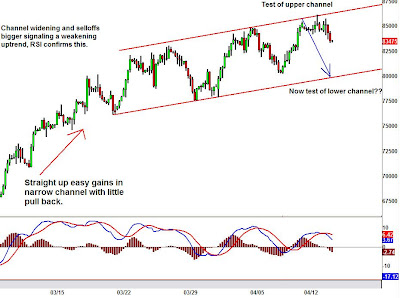 The bearish and unhealthy market structure I mentioned yesterday proved to be a good signal of the selling that came today. Several times the bulls tried to come in and rally this market from the lows like they've been doing the past few weeks, but for the first time they failed and the market closed near the lows. NYSE breadth was fairly weak, but nothing impressive. But that's expected now because declines essentially are against the larger trend now, which is up. Also note on the above 4hr chart that this decline came after touching and reversing at the upper end of the parallel trend channel I drew. This may be a clue that index will charge lower toward at least the lower trend channel area at the 800.

One thing that's also important to note in my view is the lack of progress this rally has made in recent weeks. To me, it feels like this market has been on absolute fire the past month. But if we take a closer look, that's not the case at all. As a matter of fact, the S&P futures closed at 827 on March 26th, and as of right now, the S&P is trading only 7 points higher almost 3 weeks later! So even though this market feels like it's been on fire the past few weeks, it's actually done very little. This is following a huge 25% straight line up rally from the S&P cash lows of 666 mind you. So again, as I've been pounding the table about lately, this market action is telling us it's topping, and will roll over soon.

Bottom line: I remain short the S&P, XLF, various individual tech stocks (CSCO, INTC and ORCL) and gold through bearish put spreads. It appears the S&P futures will move toward at least the 800, but most likely break that and head toward the 760-780 area.
No comments: 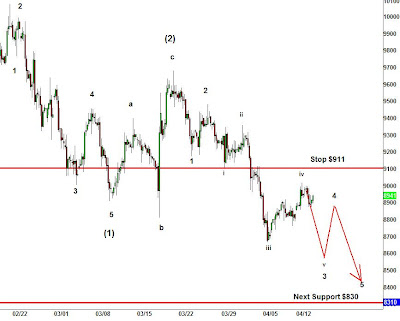 Gold weakened as the US session went on today but has floated higher in the after hours session. With a nice 3 waves up on the 4hr chart above, I'd like to see the $902 level hold to maintain the bearish outlook on gold. A break of $902 might create a 5 wave rally and cause concern. Ultimately the $911 level needs to stay intact though so I remain bearish as long as the metal trades under $911.
No comments: 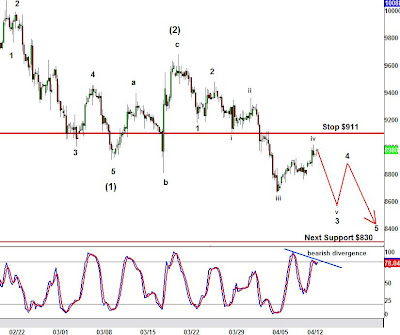 Gold broke above the $890 level and is holding above it. So far there are 3 waves up, which is a correction, in what looks like a small 4th wave. Also notice the bearish divergence on the last price high today that wasn't confirmed by the stochastic indicator at the bottom. But gold needs to give way to lower levels immediately. The break above $890 is concerning so I'm lowering my stop loss to the extreme of the prior small wave i at $911 shown in the 4hr gold mini futures chart above. Gold has been good to me and I'd rather lock in a small profit than let a good trade go bad due to greed.

So I'm still bearish gold but it needs to fall immediately to instill confidence in the view that it may hit the $600s in the coming weeks. To lock in profits I dropped my stop loss to $911.
1 comment: 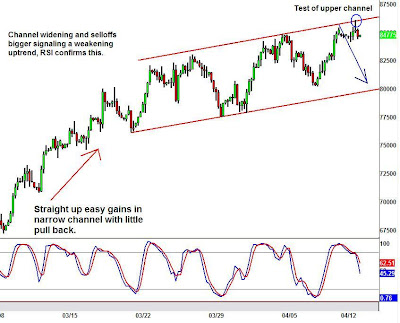 Well the market started weak again this morning but couldn't follow through as the day went on and surged higher. The market was quite split and diverged in various indices and indicators which often means signs of a shakey rally in its last stages. However I'm sure it's getting on with me constantly saying a decline is due, but that's what I see. My view is that it's way too late to get bullish with all the bearish divergences and overbought indicators our there. So I choose to go against the larger uptrend, and buy bearish option spreads and wait for a decline. If I wasn't so aggressive I'd just wait for the big pullback and then buy on the way down. But I'm aggressive, so the best play is to short this market using options to where I can risk a small amount of capital and just wait.

One thing to note is the unhealthy internal structure of the market today as it was all over the place. Of most significance is that the NYSE was up 0.63% and yet the Dow was actually down on the day. Plus, momentum indicators continue to show big bearish divergence, and it's building. Also, notice the above 4hr chart of the S&P futures. The market rallied to the upper end of the parallel trend channel I drew last week and then sharply reversed. This signal combined with the unhealthy structure and internals of the market may give us the beginning of the significant decline I've been waiting for-for weeks. A rally through resistance at 870 S&P cash will probably lead to a charge towards the 1000 area. So I will skim back a bit on a strong break and hold of that level.
No comments:
Newer Posts Older Posts Home
Subscribe to: Posts (Atom)