Key Level For S&P Euro Bumping Up on Trendline 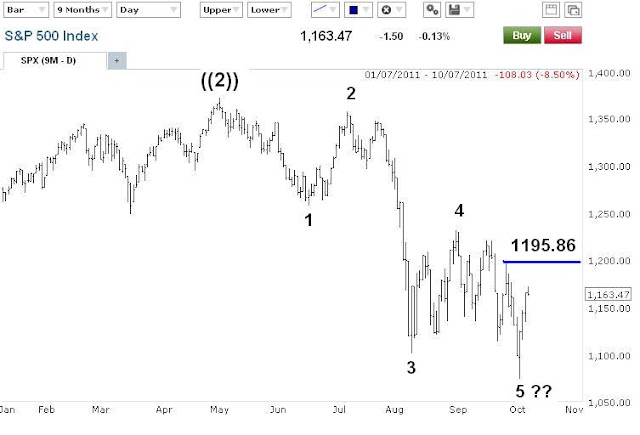 Stocks continue to move higher after that big reversal that got my attention a few days ago.  Although it seems likely that 5 Minor waves down have completed and therefore finished Intermediate wave (1), the market still has work to do to prove a major bottom is in. The series of lower lows and lower highs on the daily chart is still intact.  So it's possible we'll still get another drop lower to a new low in a choppy grinding torturous 5th wave.  I am not projecting that move, but I'm simply sayings it's still on the table until a new swing high can be established, breaking the series of lower highs.  So getting too aggressively bullish here for a swing trader like me does not seem wise.  That new high is above 1195.86 in the S&P cash.  A strong break and close above that level will probably get me to finally go long in anticipation of a long and deep Intermediate wave (2) correction higher.  Until then, I'm neutral and I wait. 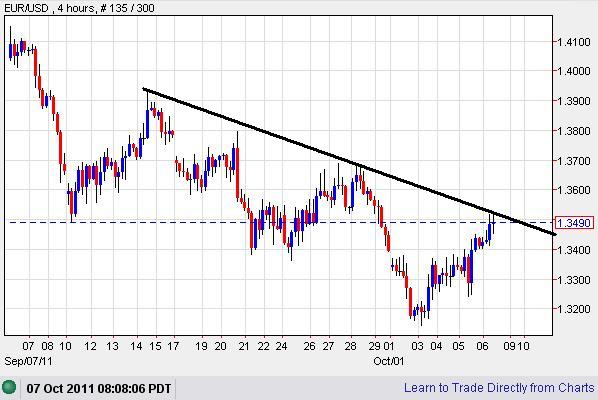 The euro continues higher but it too has not made a new high to break the series of lower highs and convince me the trend has turned up.  You can see I drew a hasty trendline where the euro is currently bumping up against.  I wouldn't be surprised that a strong break above that trendline will lead to an imminent breakout to a new swing high above 1.3700 shortly after.  From there, 1.4000 is the target.  I'm still unsure of the short term direction of the euro so I'm only holding a long term short position here.  A strong move above 1.3700, and 1195.86 in the S&P, will probably get me looking at the long side though for short term trading.

Stocks Continue Higher, Continue to Build Case for a Bottom; Euro Fills Gap at 1.3385, is that it for the rally? 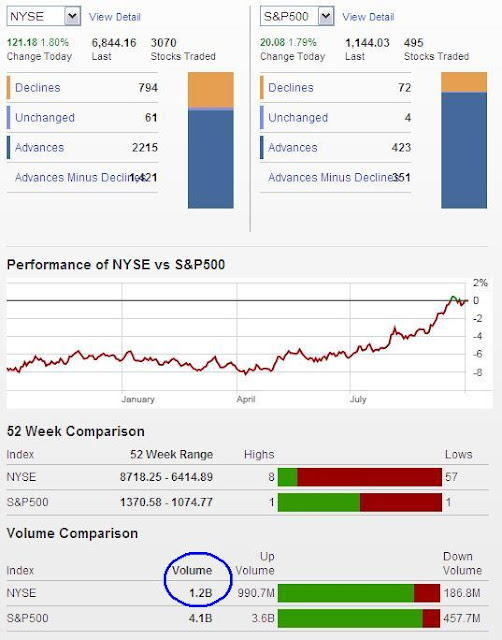 Today's move was solid, and while the percentage of volume to the upside was similar to yesterday's at 84%, overall volume decreased today to 1.2 billion shares, down from 1.7 billion shares.  So this alone is not a confirmation that a bottom is in and Intermediate wave (2) is underway.  But the structure of the decline is far from perfect for an impulsive 5th wave, if that's actually what's occurring.  So the outlook right now is mixed, which is just another reason in my view to be neutral here and reduce risk on the short side. 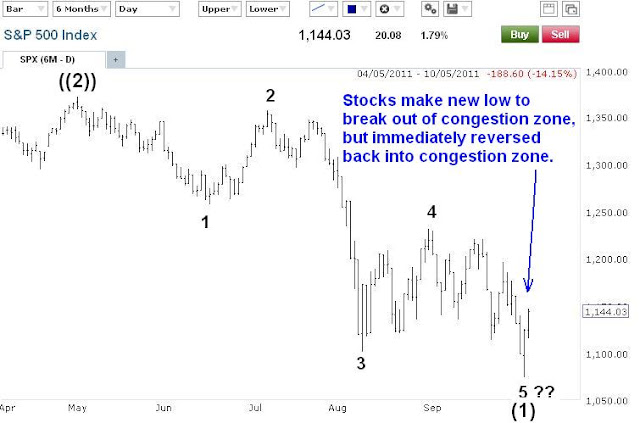 If Minor wave 5 is in fact in right now you can see that it's a very imperfect wave, and would probably have to be labeled as an ending diagonal even if it's not symetrically correct.  This would be a good illustration of what I meant by 5th waves unfolding unpredictably and imperfect, making them very difficult and stressful to trade especially when you know a major reversal of the entire 5 wave move is about to occur at any time.

But is Minor wave 5 and Intermediate wave (1) complete?  I can't say so with a high degree of confidence.  A week or so ago I said I had little doubt that we'd get a new low in stocks before a major rally phase got underway.  And we in fact finally got that new low this week.  But now what?  What I can say is that I feel good being neutral here, and that the downside looks very risky while trying to find a good time to get long is more appealing.

Put EWP aside for now.  Notice that yesterday and today the Nasdaq has been on fire compared to the blue chips.  Again this is a bullish sign as long as it exists.  And when you combine that with the divergence between the Composite's new low not confirmed by the 100 this week, it makes me think a larger move higher might be getting underway.  Also notice the price action the past 2 months.  Price has been choppy and sideways, creating a push-pull battle between bulls and bears.  Then a break down to a new low Monday, followed by two fairly strong days Tuesday and today which took price comfortably back into the congestion area.  In my opinion, that tells us that the bears threw everything they had into pushing the market lower to continue the prior Minor wave 3's work.  But it took everything the bears had to make a slight new low before the bulls pushed the market back almost immediately to close back with the "battleground" area again today.  That tells me that it's quite possible the bears have run out of steam and momentum to push this market much lower at this point, and if the bulls choose to strike here they have a good chance of taking out the exhausted bears with a continued surge higher.  Again, the theme here is to reduce risk on the short side. 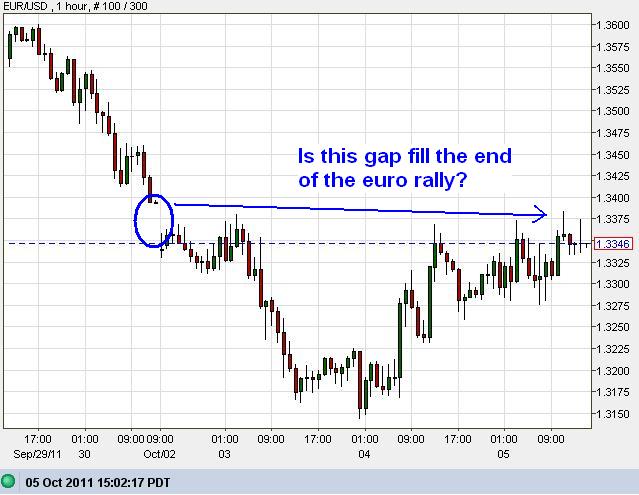 Yesterday I said the euro would charge toward 1.3400 and close the gap from Sunday and we could say that it has done so with its move to 1.3385.  I'm unsure it will continue higher from here though so I like being only 50% short with my long term position.  Any follow through higher should lead to an eventual attack of 1.4000 again.  A break down from here would probably mean new lows were just around the corner to get it to 1.3000 at least.  And it will probably take stocks down with it.

Stock Reversal MIGHT Have Legs; Euro Charging Toward Gap Near 1.40 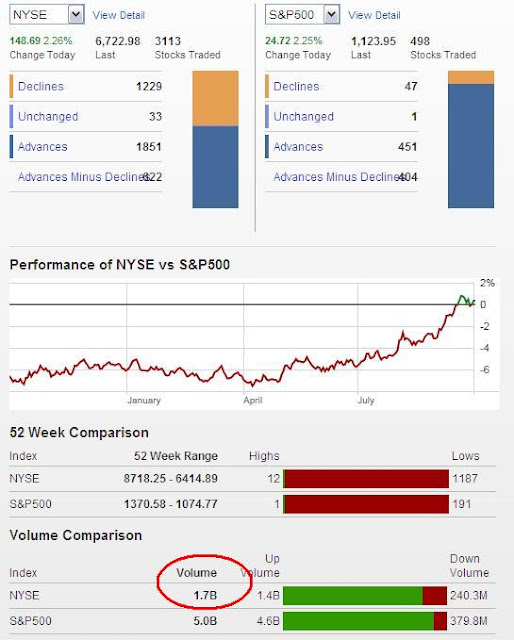 Today's late day reversal was impressive as far as the price action goes and internally it was quite strong as well since with only 1 hour of rallying the NYSE had about 85% of volume trade to the upside and almost 1.7 billion total shares traded.  This rally got my attention. 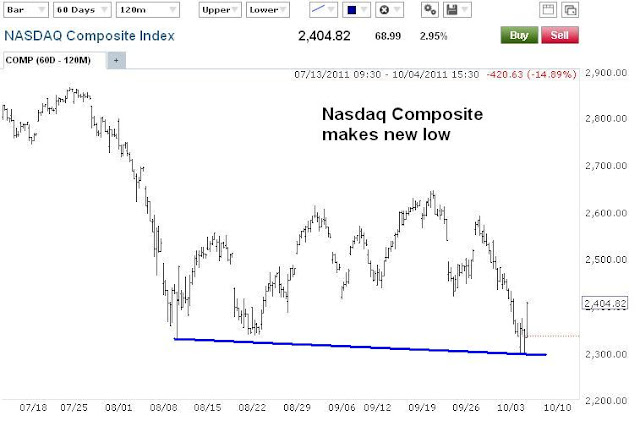 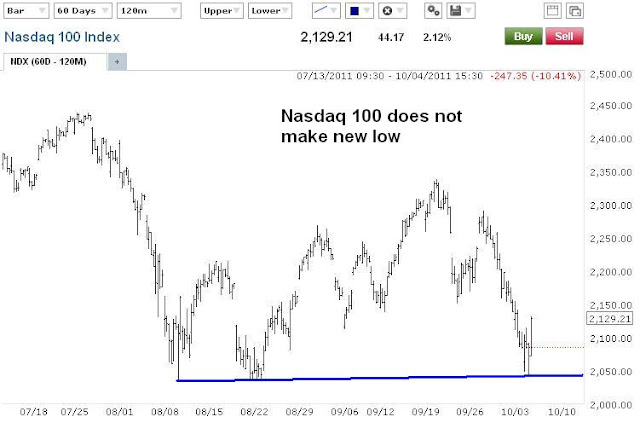 Yesterday I said I lightened up my short positions because with the new low in the S&P it satisfied EWP's requirments for a 5th wave in an overall impulsive move.  And with 4th and 5th waves being so unpredictable I feel it's too risky to get greedy here.  Today's early morning decline looked good for the bears and the wave count I've been tracking since it suggested an acceleration of the downtrend was underway.  But when you peeled the onion back deeper you'd notice that the euro was flat and the Nasdaqs were trading much stronger than the Dow and S&P, a bullish sign.  Two big divergences in the euro and Nasdaq compared to the blue chips is an important indicator since the euro and especially the Nasdaqs tend to lead the overall stock market..  Then when I saw the market rip higher at the end of the day it was enough for me to see to get me fully out of my short positions.  I'm all about reducing risk when in a profit and that's what I'm doing.  Sure the market can cascade lower like the wave count suggests, but the risk here of a major longer term reversal higher is too great, and so I'm neutral now.

Tomorrow's action will tell us a lot.  If the market stays firm and even follows through to the upside on solid volume, then I'll be looking to get long soon since Intermediate wave (2) up might be underway.  But if today's big rally is completely reversed tomorrow, then it's game on again for the bears.  So tomorrow's action is important.  Right now, I have no equity positions at all. 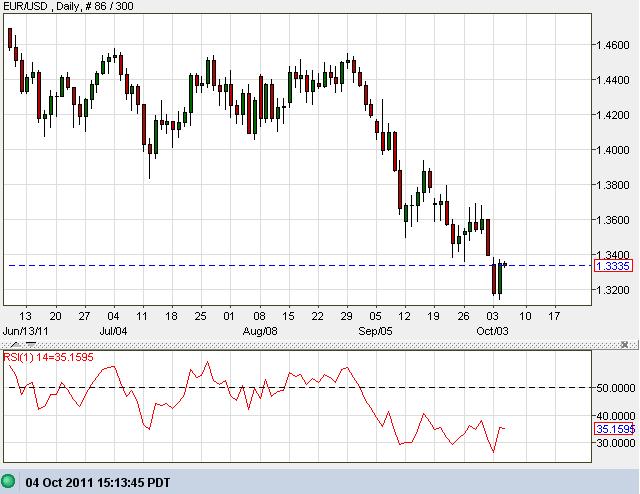 Yesterday I mentioned that the euro is getting oversold and that I lightened up some of my short positions and with today's rally I lightened up a little more.  The euro may be simply heading higher to close its gap just below 1.3400, or it may have put in a big reversal that will drift the euro higher towards 1.4000 during the next several weeks.  Either way, the euro was oversold and bounced sharply today which screams at me to reduce risk and take profits.  I do still have 50% of my original short position on, but that is more of a long term play. 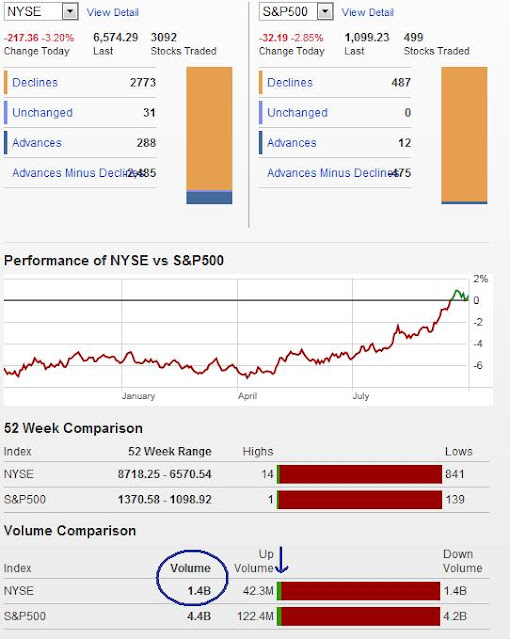 Today was a solidly bearish day with decent volume at over 1.4 billion NYSE shares traded and about 97% of all shares traded going to the downside.  But again, this is not as intense as we saw on Minor wave 3 down which had about 2.5 billion shares traded and 99% of volume trading to the downside.  So the lightening up of intensity fits well for this being a 5th and final wave as we're counting it since 5th waves have decreasing momentum compared to the previous 3rd wave at the same degree. 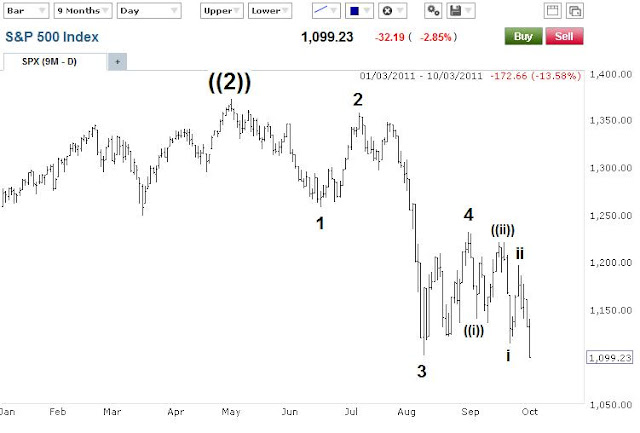 The way I'm counting the S&P above suggests the major downside for Minor wave 5 is just getting underway.  However, as I've said many times, 5th waves are tricky and often imperfect.  Since I had such success shorting Minor wave 3 and some of this Minor wave 5 as of today's close, I took a lot of profits on my short position late today.  I wanted out of the S&P around 1100 in the cash market and we closed almost right on that number, which is perfect for me.  Sure the market can fall hard like the count above suggests, but since this is a 5th and final wave, and that once Minor wave 5 is over it means that a very large and long Intermediate wave (2) rally will get underway, I'm protecting my profits and minimizing risk here. 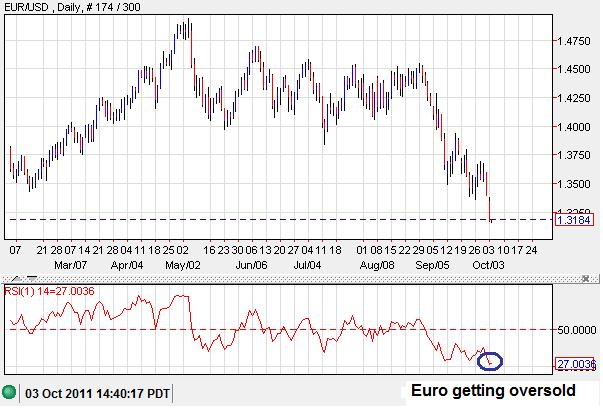 Shorting the euro the past several weeks has been very profitable.  Price action and structure does not suggest the euro is oversold, but common sense and the RSI do suggest it's oversold.  I covered half of my short positions at a hefty profit and will watch the action closely for a bullish reversal so I can exit the rest of my short positions.  This is only a short term move, I will again reshort the euro at a later time since I feel long term the euro is bearish and the US dollar is bullish.