Wave 5 Begins for Stocks; Euro Trying to Break Down 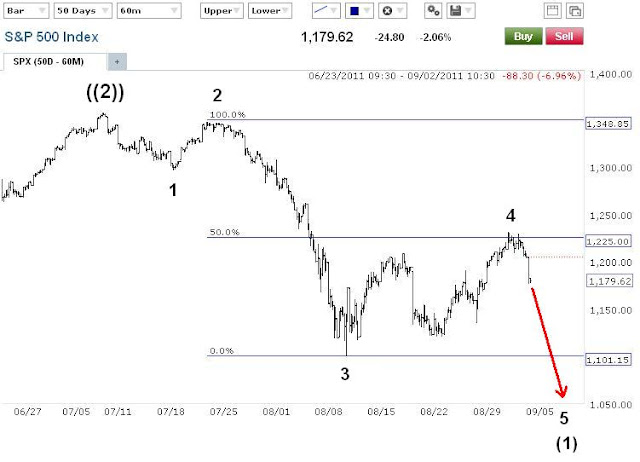 Minor wave 4 has gone on long enough to where this sharp decline from late yesterday and into today is enough for me to play a top being in.  Minor wave 4 is much much longer in time than Minor wave 2, making me a little uncomfortable with this count.  But it's the best count I have at this point, and we trade based on probabilities, not certainties.  Minor wave 5 should move rather quickly to break below 1100, and possible to around the 1050 area before a bottom should be considered.

Those Steely-Eyes of J.P. Morgan: Could They Help Us Today?
"The Panic of 1907" vs. the "Debt Crisis" of 2011
-Elliott Wave International 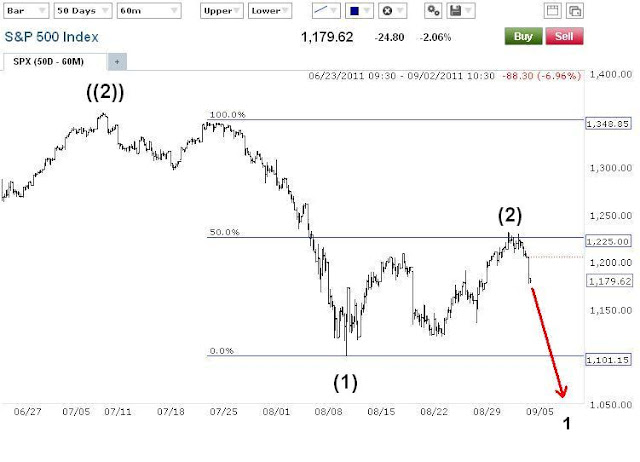 Above is my alternate count.  I know, you want to slap me and shake me violently to knock some sense into me.  But I'm not trading based on this count, I'm trading based on the more likely and more conservative count I mentioned all the way at the top of this post.  But this count here needs to be kept in mind as the market falls.  If the market falls very sharply with very bearish internals and high volume, then we need to give more respect to this count's possibility.  If this count is correct, then the market will be headed significantly lower in a hurry, and we don't want to miss that.  But we also don't want to blindly "hope" for this count to be correct and end up getting our faces ripped off on a monster rally if we're wrong.

This reason this count seems possible to me is because it would explain why the recent rally took so much longer than its corresponding rally I originally labeled Minor wave 2.  There isn't very good proportionality there.  And although it doesn't violate any EWP rules, it doesn't adhere to EWP's guidelines for a "right look".  But the big problem with this count is that Intermediate wave (1) looks much more like a 3 wave decline than a 5 wave impulsive decline.  So that's a big problem to overcome.  It's possible to get real creative and cram an impulsive wave count into Intermediate wave (1)'s subdivisions.  But I don't like to "cram" anything since doing so usually means the count is wrong and that I've fallen victim to my own biases causing me to force the count I want onto the market instead of letting the market tell me what the count is.

Anyway, I'm playing the market based on the count at the top of this post which means I'm expecting a move to at least the 1100 level.  I have a very small short position and will take profits on a break below 1100 unless volume and internals are so severely bearish that it warrants adhering to the other more aggressively bearish count. 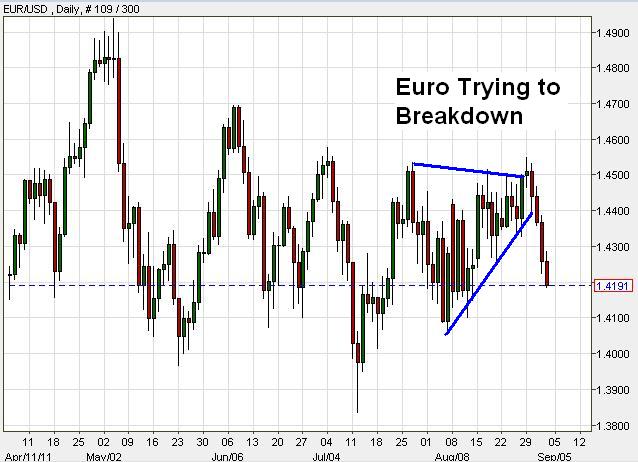 The bearish side of the euro is looking good here.  After a tight consolidation pattern and false breakout to the upside, the euro is declining impulsively to the downside.  I favor the short side on this pair, which means I'm bullish the US dollar.

PLEASE NOTE: THIS IS JUST AN ANALYSIS BLOG AND IN NO WAY GUARANTEES OR IMPLIES ANY PROFIT OR GAIN. THE DATA HERE IS MERELY AN EXPRESSED OPINION. TRADE AT YOUR OWN RISK.
6 comments: 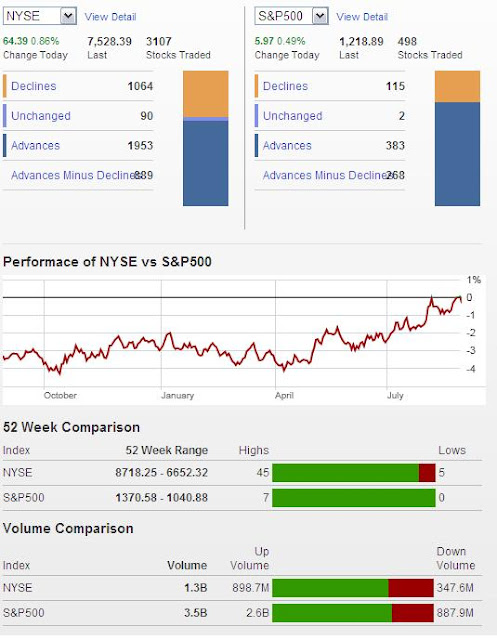 I wasn't going to post anything today but the euro declined in 5 waves and I wanted to post it.  Internals in stocks still show a feeble rally.  Volume increased today but still farely light relative to the declines the past several weeks, and end of month positioning is probably playing a role in the bullishness and uptick in volume now.  Plus, the ratio of buyers to sellers isn't that compelling to the bullish side either.  The rallying can easily continue until after the holiday Monday, but reversing at a nice level today opens the door to a selloff. 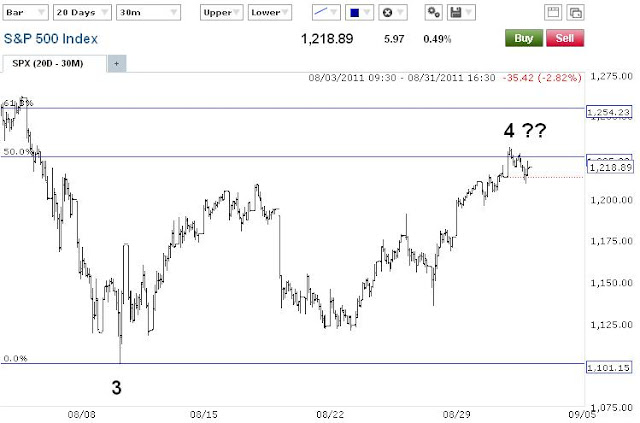 Yesterday I said to look for a reversal at the 1225-1230 area and we got that today.  Although I'm far from sure it's the mark of a top.  The reversal at the 50% fibonacci level certainly has my attention though.  I'm eager to add to my small short position if the evidence swings in favor the of the bears overnight or tomorrow. 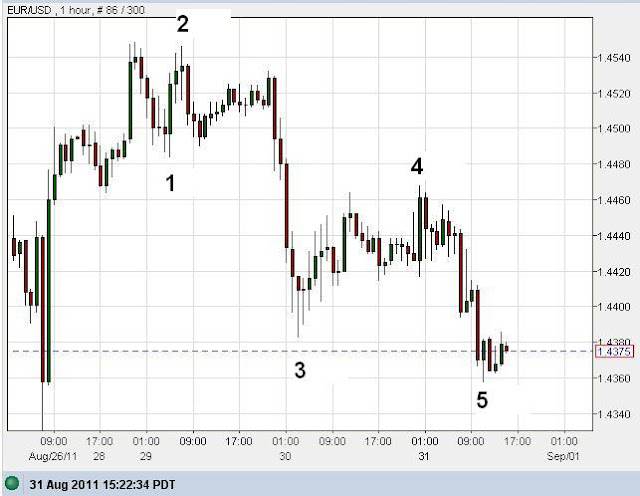 Simply put, the euro and and the pound declined in 5 waves against the dollar which has me looking to the downside for the "breakout" I've been talking about the past couple weeks or so.  I'd be looking to short into any rally I can get with a stop just above the start of the euro and/or pound's 5 wave decline.

Hurricane Irene Washed the Volume Away; Euro Trying to Breakout 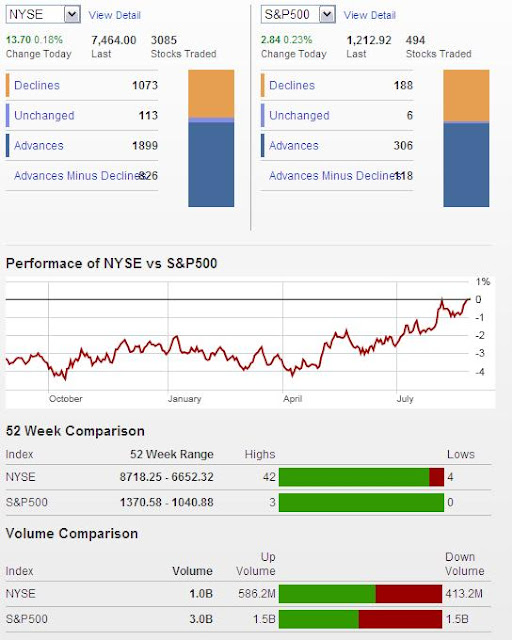 It looks like the hurricane might have washed out the Wall Street players here as volume remains very light and is preventing me from trying to get long this market.  Instead, I took a very small short position on today's weakness and plan to add short until volume reappears. 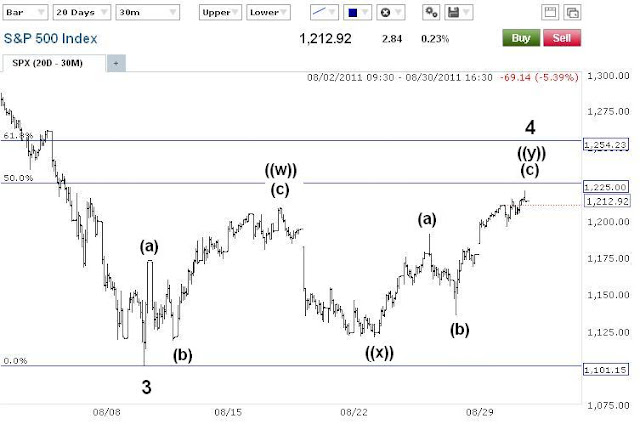 The above count seems to be the best shot at a short term count.  It shows Minor wave 4 as a double zig-zag correction.  I do feel this count is not very likely when looking at it all by itself because Minor wave 4 has become quite long in time compared to Minor wave 2, making it hard to be confident in EWP's "right look" guideline.  But with volume so low on the recent rise, and the longer term wave count appearing to still be incomplete to the downside, I'll hang on to this above count as long as it remains valid.  A big surge in volume with an upside move might change that view in a hurry though.  I want to be very nimble right now since I don't have high confidence in either side of the market at the moment.  But the wave count suggests I should be trying to get short when opportunities arise.

Today's late day reversal near 50% fibonacci retracement (1225) might signal the top of Minor wave 4.  Follow through to the downside tomorrow in an impulsive manner will add evidence to this outlook and suggest the aggressive short term bears take a shot at the short side.  If not, look for the 1225-1230 area to be reached before a significant reversal occurs. 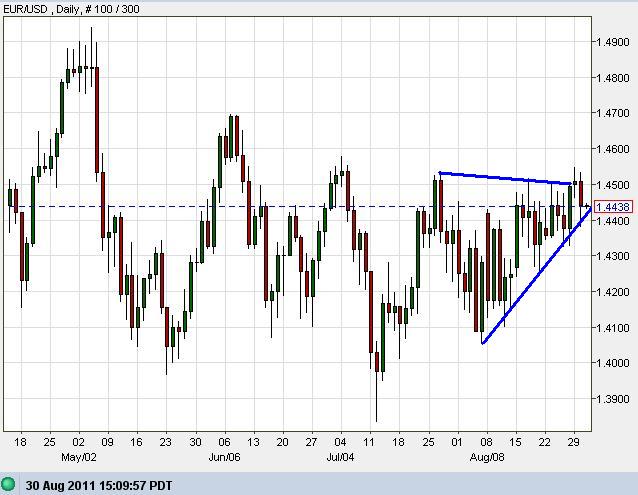 The euro still can't break out, but it's trying to, and will.  The triangle consolidation has tightened significantly that will result in a sharp move in either direction.  I can only guess that the move will be to the downside, but that guess is not a good reason to attempt getting short here.  I remain on the sidelines here. 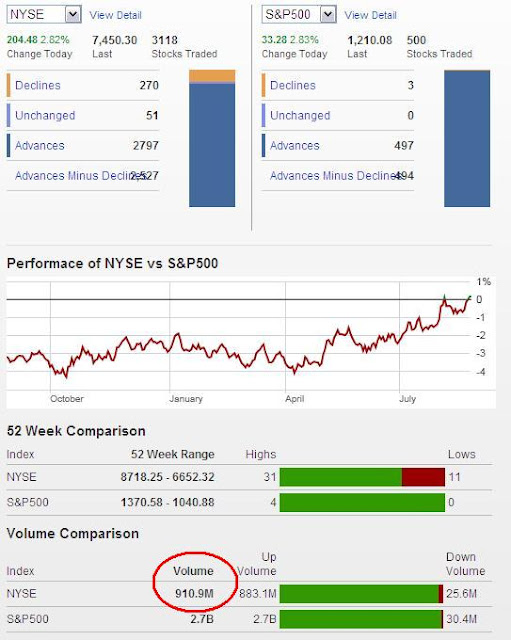 The S&P made a new high today, negating the possible 5 wave decline following the proposed Minor wave 4.  I would have gotten long this market today if volume wasn't so low.  Today the NYSE couldn't even bust through 1 billion shares on this huge surge today.  That's troubling for this rally right now. 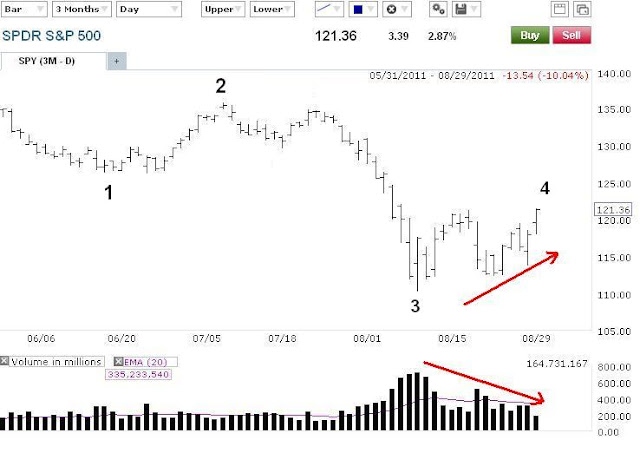 EWP has a small set of rules that absolutely must be followed when developing a wave count.  And EWP has even more guidelines that are "best practices" so to speak, that allow for wiggle room to fudge and disregard under certain circumstances and scenarios.  One of those guidelines is EWP's "right look".  For example, if the S&P dropped in what looks like an impulsive 5 wave move without violating any EWP rules, but wave 2 rallies 20 points over 3 days and wave 4 rallies 150 points over 3 months, then something is most likely wrong with the wave count labeling, most likely with the degree of trend.

Right now we don't have that severity in wave discrepency, but wave 4 is getting quite long in time, and today's new high doesn't help matters, so it's making me uncomfortable continuing to try and short here.  The only thing keeping me from getting long here is volume.  Notice on the SPY (S&P ETF) chart above that on this current rally phase we're in volume has continued to decline.  That doesn't strike me as the behavior I'd expect to see at the start of a new bull market, but rather the behavior I would expect to see in a correction.  So I have conflicting views here which are rendering me immobile, like when the Joker would tie Batman up in an elaborate way to destroy him.  Only I'm not Batman, and I don't have a trusty tool belt with wonderful toys to get me out of a jam.  I only have a computer and some cheap scotch to help me.

The make or break point for Minor wave 4 to end is 1295.92.  Risking 85 S&P points here with a questionable wave count is too risky for my blood.  But if the market falls hard with little 5 wave moves and strong volume this week, I'd be willing to get short with a stop just above that day's high. 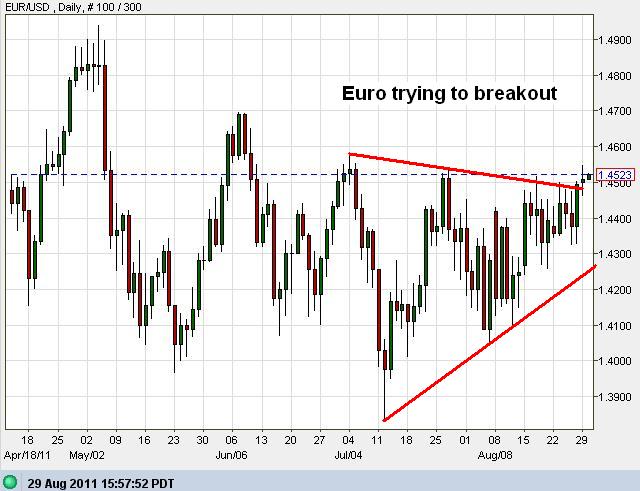 The euro might be trying to break out of its consolidation to the upside.  I'm still neutral this pair and don't have a trade here.


PLEASE NOTE: THIS IS JUST AN ANALYSIS BLOG AND IN NO WAY GUARANTEES OR IMPLIES ANY PROFIT OR GAIN. THE DATA HERE IS MERELY AN EXPRESSED OPINION. TRADE AT YOUR OWN RISK.
7 comments:
Newer Posts Older Posts Home
Subscribe to: Posts (Atom)