Stock and Euro Rallies are Weak, Larger Trend is Down 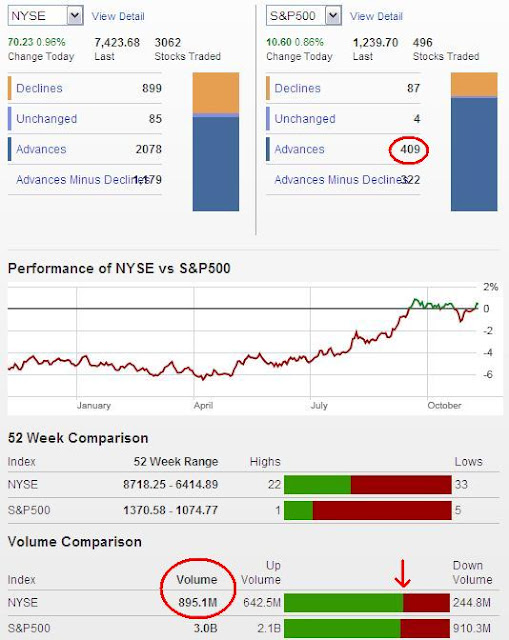 Today's price action was strong in that we got a triple digit Dow rally, but other than that, the move today looks quite weak.  The S&P lagged the Dow slighty, but the Nasdaq lagged big time as it struggled to just close in positive territory.  Also, the rally never really got any legs to push higher and hold itself higher, and as a result it so far looks weak and choppy on the hourly charts, which is corrective.  But this is subjective I suppose, but what's hard fact is that the internal composition of today's rally was quite weaker than what accompanied the decline yesterday.  Here's what I mean:

So clearly, the data we have from the last two days suggests today's action is simply just correcting the extreme bearish move from yesterday.  The larger trend is down.

America's First Deflationary Depression: Is a Bigger One Ahead? 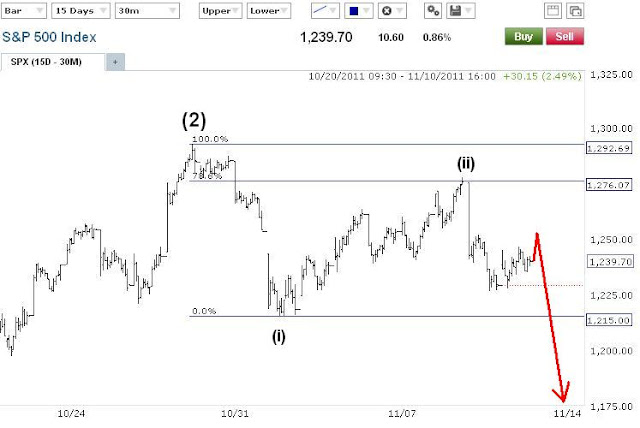 The wave count supports the internals' analysis above.  Minuette wave (ii) ended right at the 78% fibonacci retracement level of the previous decline and sold off sharply after doing so.  Today's bounce is choppy and internally weaker than the previous decline, and when you combine it with the fact that the price action looks choppy and weak so far, it has me concluding that today's move high is corrective.

Tomorrow is Veteran's Day so volume will probably be light.  And looking at the price action is seems there is a little more work to do to correction Wednesday's massively bearish selloff.  So I can see tomorrow being an up-day on light volume.  But that is fine with me, just another opportunity to add to my shorts with tightened risk at 1277. 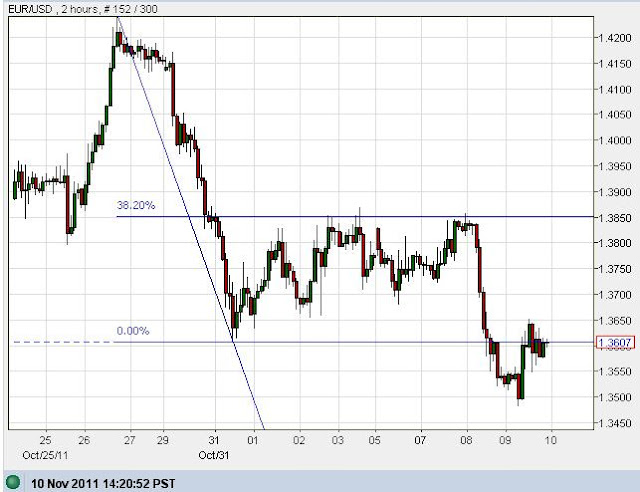 I'm getting close to developing a confident wave count for the euro, and it is aggressively bearish as you might guess.  There is no reason to think the euro's larger trend is anything but down at this point.  After the last large euro decline it could only manage a weak 38% retracement while US equities made a 78% retracement.  So I'm not expecting fireworks to the upside for the euro in the coming days either.  Regardless, the 1.3850 level should act as a solid ceiling to cap euro rallies, leaving a good clear and somewhat close stop loss level for the bears.

How Do You Get from Dow Theory to Elliott Wave Analysis?


PLEASE NOTE: THIS IS JUST AN ANALYSIS BLOG AND IN NO WAY GUARANTEES OR IMPLIES ANY PROFIT OR GAIN. THE DATA HERE IS MERELY AN EXPRESSED OPINION. TRADE AT YOUR OWN RISK.
7 comments:

Stocks and Euro Top, Look out Below! 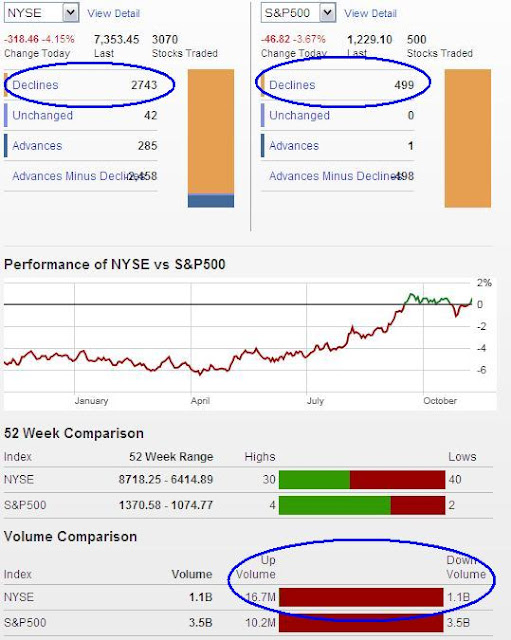 Judging by the internals and price action today, all signs point to another significant top yesterday.  Adding to this is the fact that the S&P cash index topped and reversed right on the fibonacci retracement level of 78%, a common place for second waves to end.

Today's internals were extremely bearish with only 1 S&P stock closing higher, 98.5% of NYSE volume to the downside, and 9.6 decliners for every 1 advancer on the NYSE.  When you add everything together, the market is tracking the wave count well and it means that heavy selling to much lower levels is ahead of us.  The only "question mark" out there for the short term is how the Thanksgiving and Christmas holidays will play on the markets since they tend to be composed of light volume rallies for the market.  Yet the wave count suggests aggressive selling in the coming months.  We'll see.

For my charts and wave count see yesterday's post below.

Stocks Retracement is Deep, But Ending Soon; Euro Can't Get Off the Mat 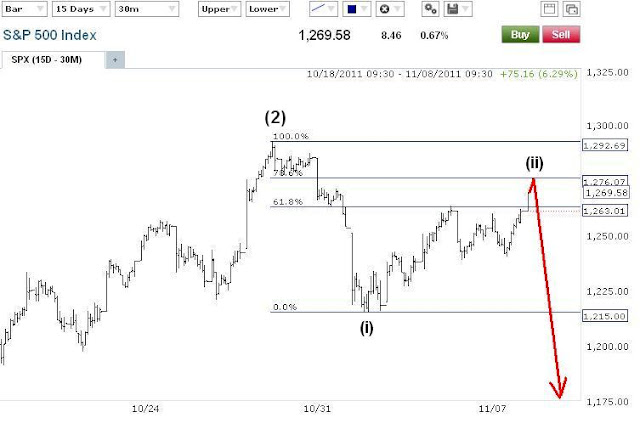 Nothing really new or exciting has occurred since the last post.  Still watching and waiting for a reversal and don't see it yet.  Stocks only "paused" at 61% fibonacci and are attempting to launch an attack on the 78% fibonacci retracement level at 1276.  Deep retracements are not uncommon for second waves.  The key is that 1292.66 remains intact.  And as long as it does remain intact, I view the market as very very very vulnerable to a serious decline.  The risk/reward favors the bears big time here.  I can always be wrong, so I'm not betting every cent I have on the move, it's just that probabilities and the risk/reward strongly favor the short side here with a stop just above 1292.66 - in my opinion.

The current rally still looks corrective.  It continues to be choppy and uninspiring internally as volume continues to decline as prices rise.  And the euro is having trouble getting off the mat, suggesting the appettite for risk is muted as people are still trusting the US dollar versus the euro currency at this time.  That to me is a subtle sign of the real internal risk appetite of the fiinancial markets with all this Europe mess going on.  Risk taking is muted, yet hope is strong; a combination for nice selloff soon. 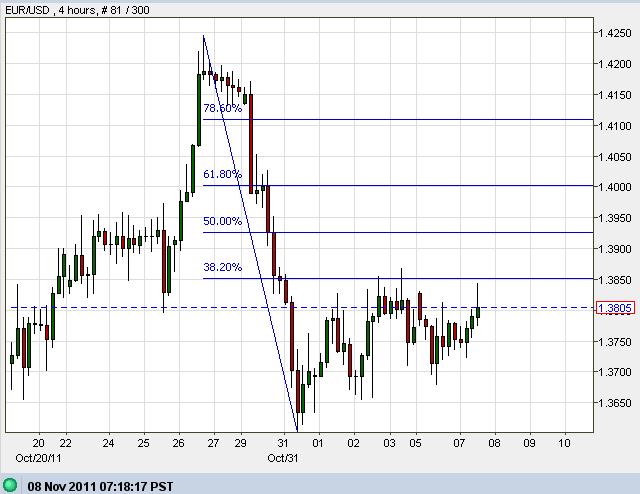 Here's what I mean about the euro not being able to get up off the mat.  It is having trouble getting through even the 38% fibonacci level, despite US stocks rallying towards their 78% fibonacci level.  To me, this divergence between the two markets suggests that the stock rally represents the "hope" that everything is okay and anticipation of a strong market in the coming months, while the weakness in the euro shows the true underlying feelings of the global financial markets which is one of fear and restraint.  That's bearish.

Risk is wide here on the euro since it can rally to almost 1.4250 before topping, so I have decent short position on now and will add shorts on rallies, or on signs of a reversal.

How Do You Get from Dow Theory to Elliott Wave Analysis?