I've started my Thanksgiving with family and friends already, so today's post will be brief.  I'll be back  Monday.  Happy Thanksgiving all!!

Today's internals show a very bullish day right in line with price, however volume was obviously low with the day just before Thanksgiving.  The flip flop nature of the market and internals the past week or so is symbolic of a triangle which I'm counting for Minute wave ((iv)). 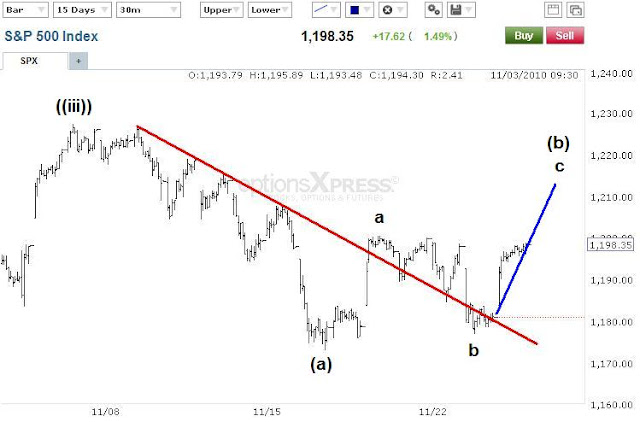 The market rallied strong off the descending trendline that I've been tracking the past few days as expected.  Today's rally should continue Friday and maybe early next week to complete Subminuette wave c of Minuette wave (b) within the Minute wave ((iv)) triangle.  My target area of Subminuette wave c to top is at the 1214 area of the S&P.  The triangle scenario suggests a net sideways move for the next several weeks, so be positioned accordingly, at least until the triangle scenario is complete, or busted. 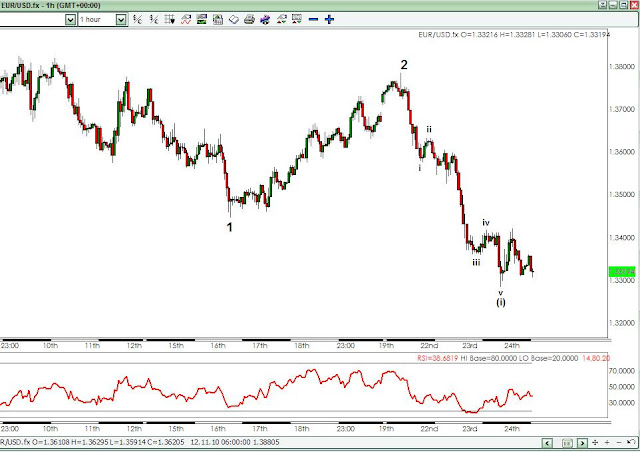 Despite the stock market's strength, the euro remained weak as well, and the US dollar strong.  The typical Thanksgiving time euro weakness and dollar strength is back in action this year.  Although it appears Minuette wave (i) might be complete since 5 waves can now be counted down from the Minor wave 2 high.  So a sharp Minuette wave (ii) rally MAY be on the horizon.  I certainly would not get long the euro here, but for those who want to enter short, or add to their shorts, you might have an opportunity coming soon.  But the larger trend is still firmly down, so the path of least resistance remains to the downside.

Stocks Should Bottom Soon if Triangle is Correct; Euro Decline Looks to be Just Getting Started

The market sold off apparently because North Korea is trying to start a fight, and banking issues in Europe that keep lingering, and even deteriorating in some cases (Ireland).  However despite the market’s selling today, volume was still a bit quiet as just over 1 billion shares were traded on the NYSE.  So people didn’t find the news important enough to disrupt their Thanksgiving vacations and rush to a computer to sell.  I will say that the weakness so far on this holiday week is a bit of a surprise.  But if the big picture results in a triangle during this period and into the new year, then it will all make sense. 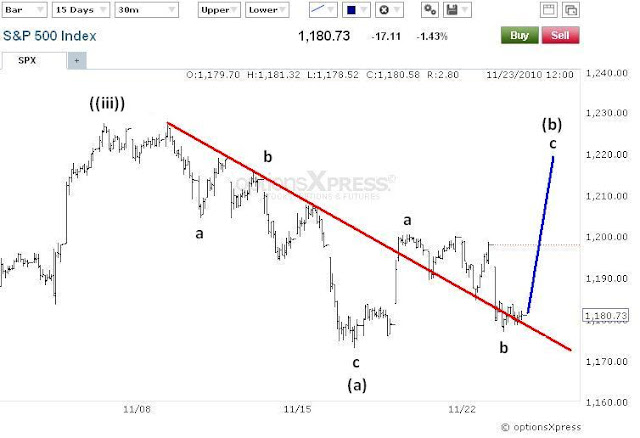 The bears were in full control today since 90% of volume today was to the downside, and 464 stocks on the S&P closed down.  The bears clearly ruled the day.  But as I’ll discuss later, the S&P is still trading on the descending trendline, the VIX has a triple-bottom in place which would be rare if it holds, and we’ve still yet to see follow-through or a breakout trend setting move get established yet.  And with tomorrow and Friday expected to be very light trading days, I’m not sure we’ll get that decisive trend setting move until next week.
Although the market continued lower today, it did not close below the descending trendline I’ve been tracking since this decline started early this month.  And the decline today still fits in well with finishing off a Subminuette wave b within a larger triangle.  If the above count is correct, the next big move in the market should be a sharp shot higher towards the 1210-1220 area.  But if the market continues lower instead, and especially if it closes beneath the descending trendline, then it will severely damage the likelihood of the triangle from occurring and force us to look at other more likely wave counts.  But keep in mind that the choppy decline from the highs this month signals it’s still a correction, so I’d still be focused on a corrective pattern unfolding until 1129.24 is broken.
Learn Elliott Wave Principle 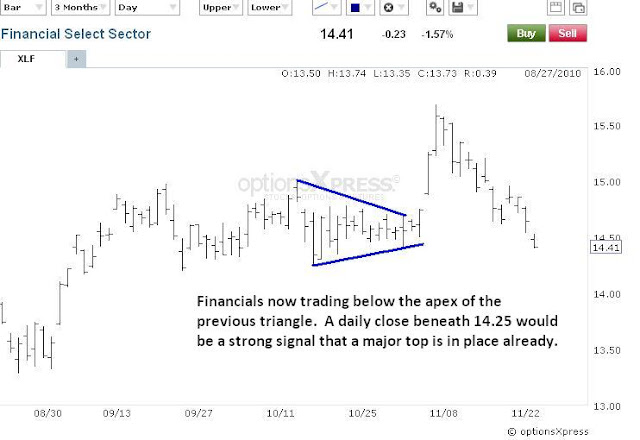 To follow up on the XLF action I’ve been tracking, I wanted to point out that it closed below the apex of a previous triangle.  So the financial sector is tip-toeing towards giving us a very bearish signal here.  You can see that it’s currently trading at a very congested area right now it’s no surprise it’s struggling here.  So I want to see a daily close beneath 14.25 to give the signal that a significant top is already in place.  One more big down day from here should do it. 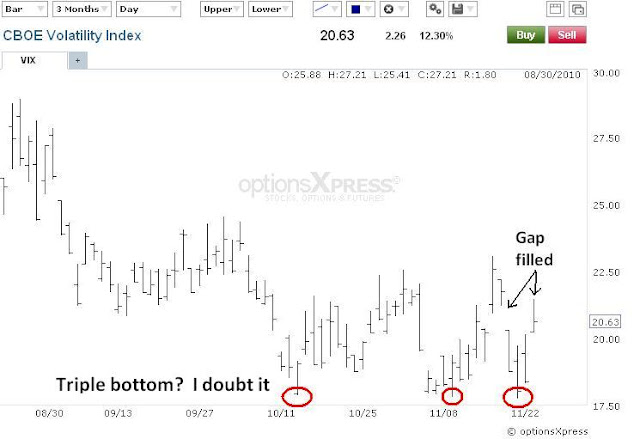 I mentioned before that triple bottoms are extremely rare, and for the VIX to not continue lower to a new low would be a big surprise.  Today’s surge higher filled a gap left open from last week so it seems quite likely that the VIX will continue lower from near current levels.  This would of course mean that stocks will shoot higher.  This fits my above wave count on the S&UP calling for a sharp Subminuette wave c rally from near current levels.
Free eBook teaches you how to apply Moving Averages to your trading or investing 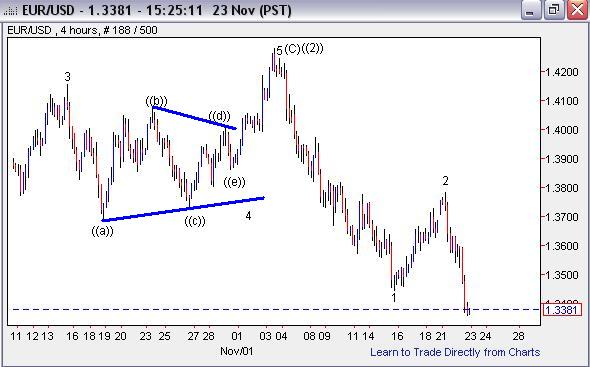 The euro has fulfilled expectation both in its typical Thanksgiving holiday weakness, and with the wave count.  The wave count yesterday suggested that the small 5 wave decline it traced out early this week was a sign that the euro had topped and more selling was on the way.  If it was a Minor wave 2 top like I suggested yesterday, that would mean that it would have to fall very hard very soon in order to fulfill the expectations of a Minor wave 3.  And today it did just that.  But if the count is correct, Minor wave 3 is far from over.  I expect further weakness in the euro and a quick move toward 1.30 at least, if in fact it’s in a Minor wave 3 down right now.  Euro weakness of course means dollar strength, and dollar strength of this magnitude would put a lot of pressure on stocks and commodities.  I know this conflicts with the call for higher stock prices from here, but I have to call each market as I see it independently.  We’ll see which one prevails.
Robert Prechter Explains The Fed, Part II 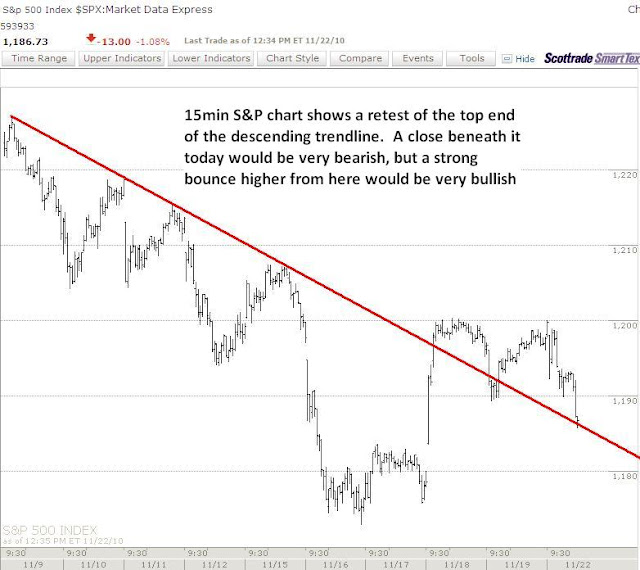 The S&P declined to the top end of the descending trendline I've been following since this pullback started.  However it's having trouble breaking below it, so far.  Failure to break below it, and establish a daily close beneath the trendline leaves the possiblity open that it is merely a "retest" of a recently broken trendline and will surge higher soon; which is a typical behavior after breaking through a significant trendline.  So the S&P is at a crucial juncture here, and the short term movement from here could easily define the trend in the coming days/weeks. 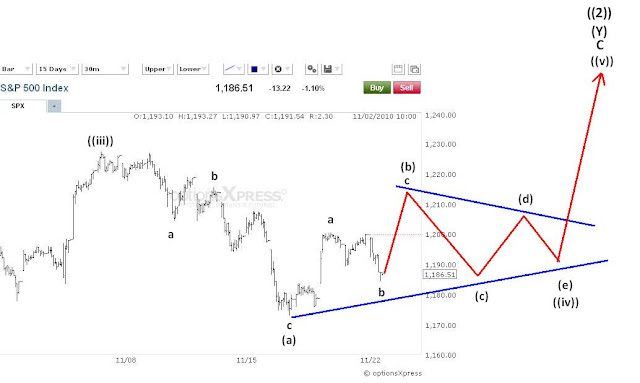 It's important to keep this triangle pattern in mind as we grind forward here into the holidays because the sharp up-down moves, especially the sharp surprise moves like this morning, can drive traders insane for weeks.  But if we're aware that a triangle might be forming, we'll be ahead of the game while others are running around in circles and frustrated as they pull their hair out.  Until the triangle possibility is eliminated, it needs to be respected. 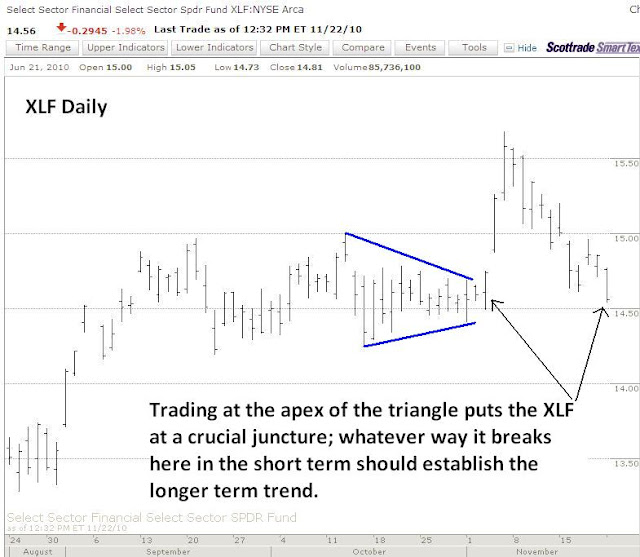 The financial ETF (XLF) also appears to be back at a decision point as well.  It's decline today puts it right back at the apex of what looks like a previous triangle.  A sharp short term move in either direction from here should define the larger trend going forward.  So this will be interesting to watch here. 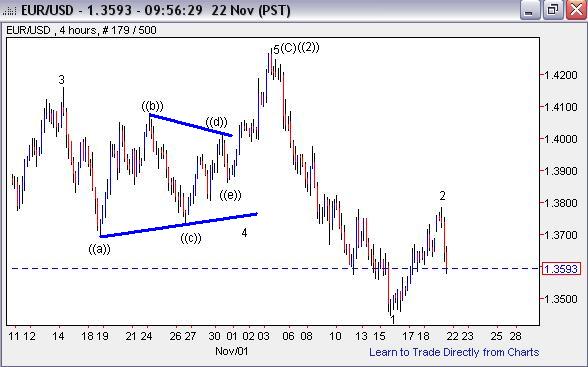 Minor wave 2 in the euro may have topped last night.  The bulls made a fatal mistake Sunday afternoon when they gapped up at the open and failed to close that gap for several hours.  Leaving that gap open into the european session told me that a sharp reversal would likely be coming soon.  Remember the Thanksgiving dollar bullishness I've been talking about?  (Dollar bullishness means euro weakness).  So now is not the time for the euro bulls to get lazy or sloppy, and leaving a wide open gap at Sunday's open was sloppy, and today they paid for it as the euro bears came in strong. 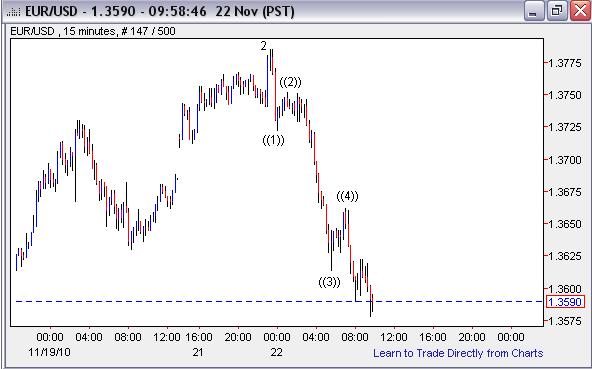 Minor wave 2 looks a bit shallow so I can't eliminate the possibility of a rally to new highs coming later on.  But the evidence and risk/reward strongly favors the bears so much here, that I'm still going to focus on the bearish potential here.  I count a nice 5 wave decline from the Minor wave 2 high occurring, which strongly suggests that the euro has topped, and the US dollar has bottomed.  If so, the Minor wave 3 potential here is great for the euro bears and dollar bulls, with risk limited to the Minor wave 2 extreme.

A top in the euro would make it very interesting to see how stocks and commodities react.  With stocks apparently in a triangle it may make it difficult to achieve that goal.  But we'll see.