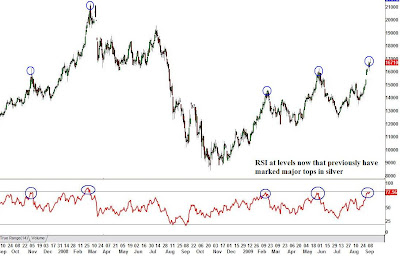 Above is the daily silver chart showing that the RSI is currently at a level that has previously marked an area what it has formed a major top. Many of the previous tops and declines have eventually led to complete reversals, but with wave 3 down coming soon in the stock market, precious metals should tank to new lows for the year with that collapse. So this "topping" signal is most likely not just an ordinary drop and rally that has occurred. It's most likely signaling that silver's major top and 50% decline is near.

We still need to see a sharp selloff and break down to new lows to confirm any top, but it's important to note that with the RSI reaching overbought territory, the level that has previously market major tops, and with optimism in the 90% bull range, the next move of significance is down. And it will be down big. The euro, gold, silver and the stock market should all top and reverse around the same time, and all those markets appear near that top. I'm waiting for confirmation.
No comments:

Corporate Executives Dumping Their Stock for Most of Rally; September 11, 2009

I've heard that insiders, i.e. corporate executives within the company, have been selling their stock feverishly the entire rally over the past few months. But in true bullish media fashion, it gets barely any headlines, until now. Insiders obviously know the true story behind their company's earnings and profits and if they're selling in massive numbers, then that's not good for the future and shows they don't believe in the rally. The 800 pound gorilla in the room is that all these firms have been posting great earnings numbers and beating estimates for the past two quarters yet how did they do it? They did it with massive spending cuts, shutting down factories and stores and slashing their work force drastically. So when you add it up, their earnings were good because they had reduced overhead drastically, not because the consumer is making a comeback. So the earnings data and future outlooks are window dressing and fluff. Using this window dressing won't work forever though. Eventually that high unemployment they're dumping on the economy and the shutting down of stores will backfire if the economy doesn't do an about face and rally hard. Which it is not. Insiders probably know this little fact and are selling their stock, knowing that they pumped up their stock prices for the short term in hopes that the economy would recover and then they can hire again and grow. But it's not happening, and the next few quarters of earnings and sales should be horrendous, and fuel the flames of the wave 3 crash. Here's the article on insiders by CNN: http://money.cnn.com/2009/09/10/news/economy/insider.sales/index.htm?postversion=2009091107
3 comments: 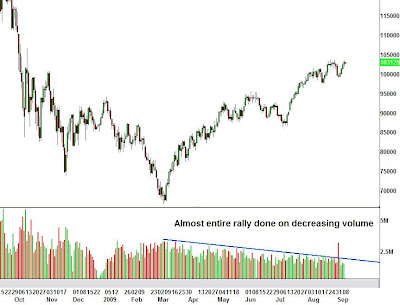 With the market not following the wave 3 collapse model as it should, it seems the market still wants to chug higher to new highs, just as the Nasdaqs did today, I want to keep the bigger picture in perspective. On top of optimistic being at extremes higher than what they were at the 2007 market top, also notice on my daily S&P futures chart that volume during the entire rally since March 6, 2009 has been on decreasing volume. This is textbook characteristics of a bear market rally, and NOT a new bull market. So even though it's been very difficult calling the absolute top in this market, numerous indicators in the big picture strongly suggest that this entire rally will be completely reversed, and most likely it will be done much fast than it rallied.

I will post anything new that develops regarding when the wave 3 collapse begins.
2 comments:

If the Wave 3 Collapse is Underway, the Market Should Fall Hard Immediately Thursday Morning; September 9, 2009

No need to drone on with "guessing"; the bottom line is that if the market is in fact in wave 3, which looks more and more unlikely every day, then it must fall hard first thing Thursday morning. The wave count and sentiment and bullish internals have reached a point where any further rallying will negate the SHORT TERM bearish call. So immediate selling tomorrow morning is required. 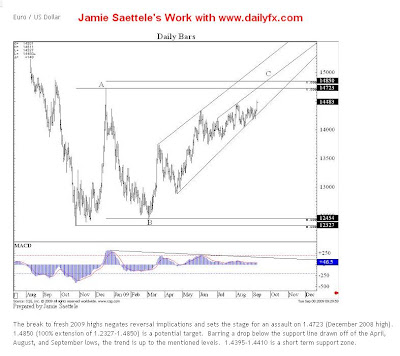 For those of you who are currency traders and know that right now the EUR/USD is correlated fairly well to precious metals and the stock market, I wanted to post what Jamie Saettele with FXCM says about the pair because it mirrors my expectations and wave count now that it broke through the previous high of 1.4440. Jamie's long term outlook and wave count on the majors are very similar to mine so I recommend his column on DailyFX to be looked at on a daily basis for free currency analysis: http://www.dailyfx.com/

The entire article excerpted above can be found at: http://www.dailyfx.com/story/dailyfx_reports/daily_technicals/Dollar_Breaks_Down___Pairs_1252419404910.html
No comments: 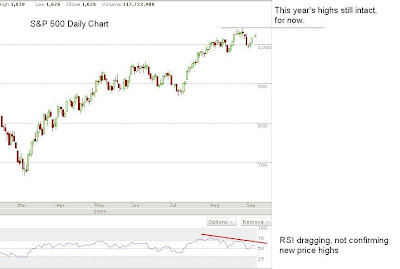 Today's rally in the stock market really didn't get any legs from Friday, the big rallies in the European and Asian sessions, and the crashing dollar this morning. Internals are not strong at all, however all this can change rather quickly. As long as the highs of the year are not broken then the bearish call for wave 3 is still on the table. But the market needs to give way and fall hard soon for this to remain a possibility. The first step for the bearish case was to have little or no follow through with all the rallying from last week and overseas. That is happening SO FAR. The second step is for a major reversal to occur very soon.

Gold and silver appear to be doing "blow off tops" which commodities normally do, and the dollar is making new lows which appeared likely after the sideways movement it had done for weeks. My eye is on the EUR/USD though and I expect it to pop above it's previous 1.4730 high to complete a "flat correction" where it will have a formed a major top and reverse at least 2,000 pips from there. Gold and silver should follow and fall hard after this blowoff top is complete. The stock market should fall at the same time as well.

So now we wait to see what happens and see if this year's highs remain intact to keep the wave 3 crash possibility still on the table. Hopefully we'll get a better idea of where we're at in the market by the action at today's close which could get quite volatile.
No comments:

Friday's strong rally on strong breadth and internals after getting so-so news on the US job market was very bullish. All the indicators and reactions in the past several months point towards Friday's big rally being the beginning of a larger rally that should last for days or weeks. So new highs are quite possible. The only that gives me pause in completely abandoning the short term bearish call is the fact that it was a trading day prior to a long holiday weekend and the rally was done on very very light volume. However, the Asian and European markets rallied hard on Monday and US futures are up fairly big. This is not the type of reaction I'd expect if the mass of traders were bearish and didn't agree with the rally on Friday. It tells me the masses agree with the rally and think the market should move higher. And the fact that so many people are coming back from taking time off for the holiday, it means that this market can really soar a lot higher this week.

The first hour of trading Tuesday morning will tell us a lot. If the market just comes out of the gate rallying and continues throughout the morning on strong volume and breadth, then we will know that wave 3 most likely is not underway yet, and we'll have to wait just a little longer for it to begin.

I still have all my same positions.
No comments:
Newer Posts Older Posts Home
Subscribe to: Posts (Atom)