Stocks Trying to Breakout, But Still No Volume; Euro Tops 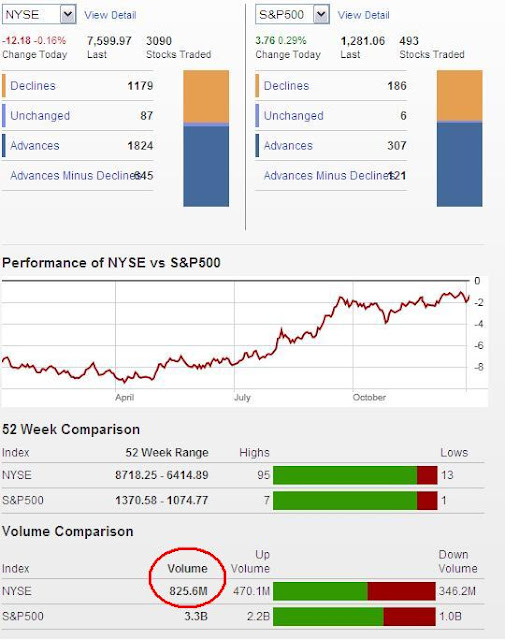 Stocks have done nothing the past two days so I wasn't going to even post anything today but the action in the euro demands attention.  Looking at today's internals you can see that volume is still declining and overall very light, and that there is a general malaise amongst market participants after the New Year surge.  So the New Year kicked off with a typical bullish day, but there's been no follow-through to the rally.  That's overall bearish in my view.  When volume re-enters, stocks should fall soon afterward, if not immediately.

Why Choose the Wave Principle? 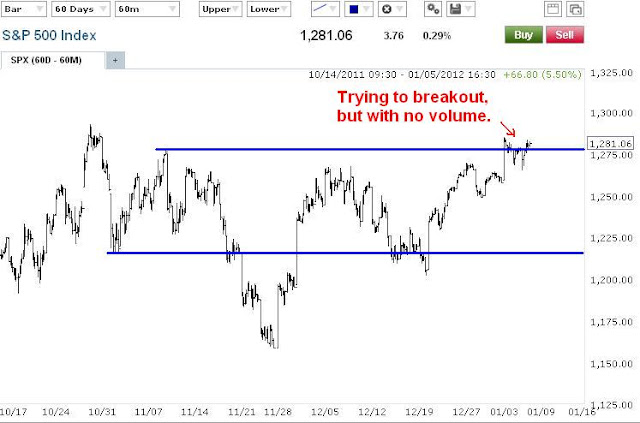 Nothing has changed from my last post, so see my comments and wave count below in the previous post for context of today's thoughts.  Stocks have been range bound for a while now, albeit not perfect at all.  I don't recommend trading off this since it is quite imperfect, but it is something to watch.  On the daily chart you can even see what some call a "pennant", but we wavers call a "triangle".  Only it doesn't fit EWP's rules for a triangle so I'm not posting it here.  But it's still worth noting that this pennant formation has made it onto CNBC where some analysts have mentioned it looks like we're breaking out to the upside.  The contrarian in me would love that.  A sharp rally out of the "pennant" would most likely lead to a quick reversal, and probably mark another major top.

Stocks are trying to break out of the range they've been in the past couple months, but will have a hard time doing so without any volume to fuel the move.  Like I said above, a sharp rally and reversal would be a welcome sign for the bears to jump in with a clear stop level just above the top of point of reversal.  The action in the euro also lends itself to the near term bearish outlook for stocks as well. 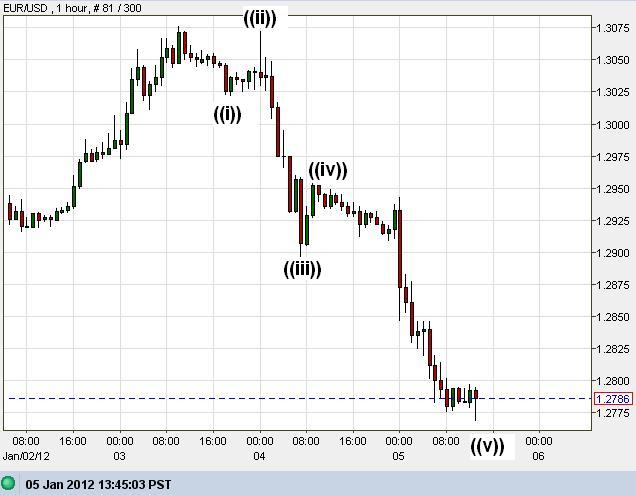 And speaking of the euro, it got a little sneaky the other day as it topped and sold off sharply before I had a chance to get in fully short.  I added a small amount to my core short position yesterday around 1.2925, but only about 10% of what I wanted to add altogether.  It may be tough to add shorts at this point, but if we're fortunate enough to a big bounce after what appears to be a nice 5 wave decline, I'll be adding shorts ferociously since it looks like another big top in the euro has occurred.  And this bearishness also lends itself to the bearish outlook for stocks as well. 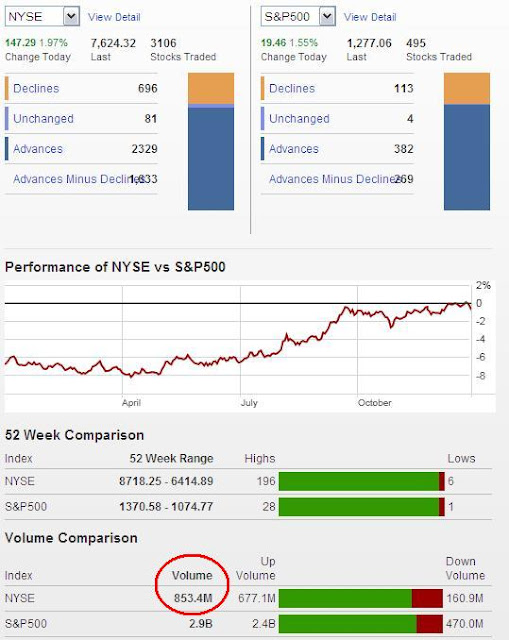 The new year kicked off with a bang for the bulls as there was strength through most of the day with the Dow closing up almost 200 points.  Not a surprise really since many people engage in fresh buying to start off the year usually.  But volume is key here.  Volume remains very light on the rally the past few weeks and only 853 million shares were traded on the NYSE today.  So all-in-all, today's rally didn't have much teeth in my view.

Preparing Your Finances for 2012 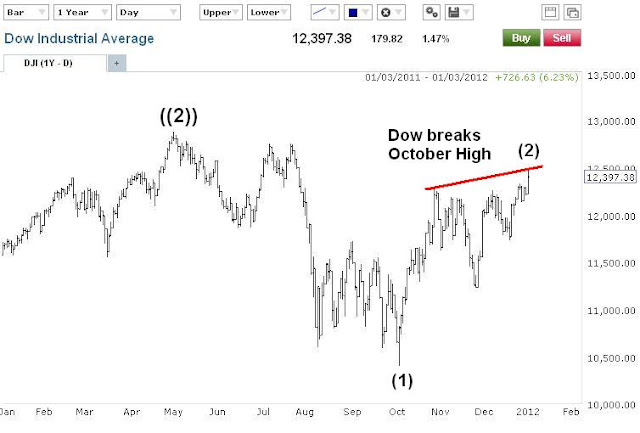 In addition to the light volume on the rally, the market is fractured at the moment.  The Dow has exceeded its October high, while the S&P has not (see below chart).  The Dow's structure fits well into a WXY "combination correction" for its Intermediate wave (2) which means a top will occur at any minute.  The ensuing decline will be massive, and fast. 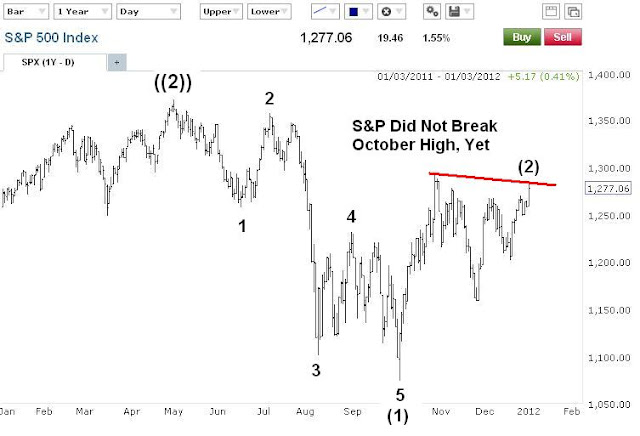 Here's what I mean about the divergence in the Dow and S&P.  You can see here that the S&P has failed to exceed its October high, so far.  And so the wave count for the correction is more complex than the Dow's.  A big reversal while this divergence is in place would be a great risk/reward opportunity for the bears in my opinion because it would suggest a major top might be in.  But patience is key.  The S&P may also want to continue higher to exceed its October high along with the Dow.  This would not negate the longer term bearish view, but it would just make it harder to get as aggressive on the short side.  So I'm simply waiting for the market action to unfold, and make it prove to me a top is in and that I should get short. 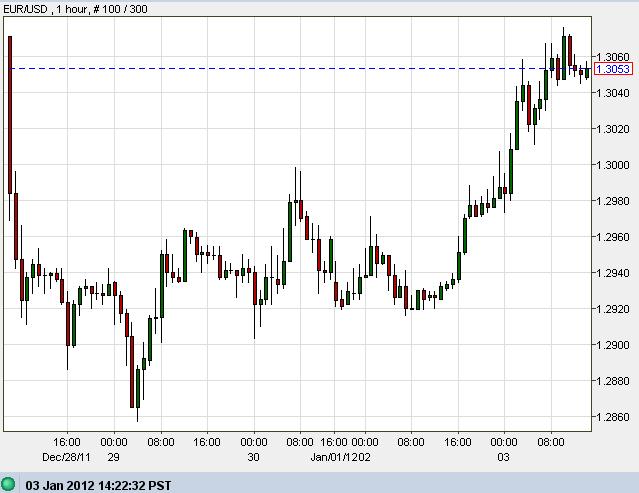 Looking at this hourly euro chart may be concerning for the bears.  The structure looks strong, and can even be counted as impulsive, suggesting that the larger trend is now up.  But..... 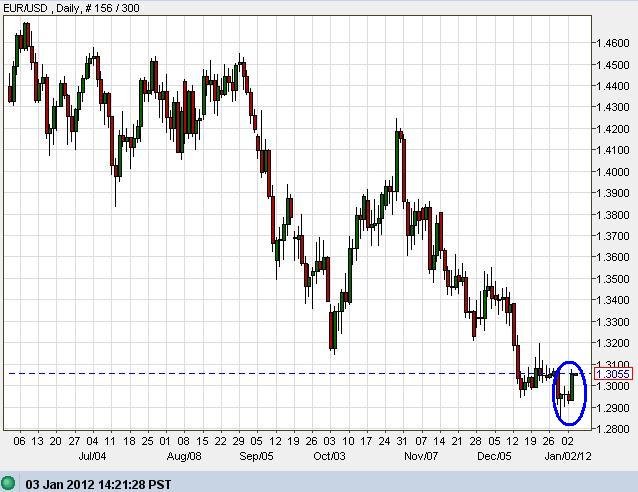 ....looking at the daily chart above, you can see that the recent rallying is just another bump in the road on its way lower.  The reversal candlestick in the 1.2850 area along with the big daily candle yesterday suggest a temporary bottom may be in for at least a few days.  But all that means is that I lightened up my short position a bit, and will re-enter fully short when I feel the downtrend has resumed.  Until then, I'm shorting into rallies and waiting for a big reversal day to the downside.  The euro's larger trend remains down.