Looking for a close below 1312 to get short again. 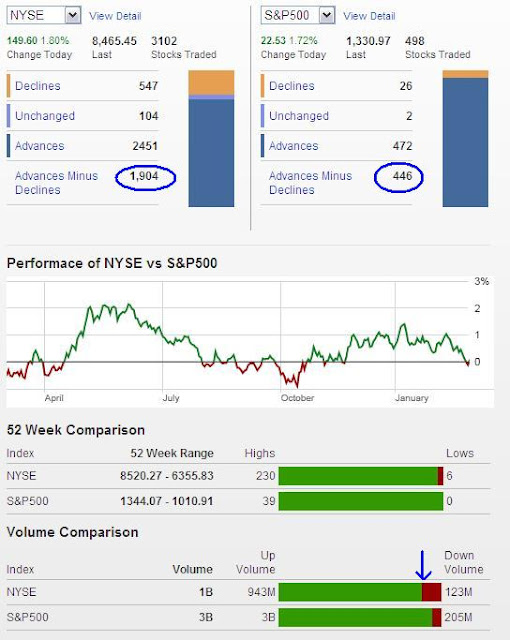 The market rallied today as expected. But it rallied much stronger and higher than I expected. Does this look and feel like a Primary wave ((3)) decline folks? Not to me. But let’s focus on the short term since that’s the best strategy in my view. Internals on this rally were extremely strong, the bulls had full control from the start of the trading day to the end. Advancers and up volume crushed the bears today and total volume was also solid. It’s days like today that often put a floor in the market for days/weeks. So be ready for more upside if the bears don’t show up Friday. 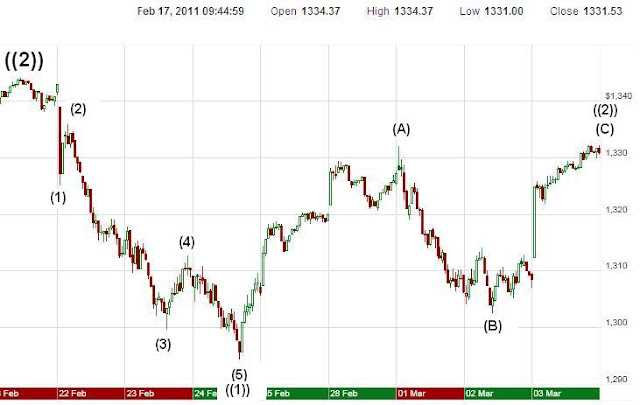 The major indices made new highs today so I’m on the sidelines again. Only a big time bearish reversal to the downside Friday that erases what the bulls did today would get my attention again on the short side. But right now, the bulls have control. Tomorrow will be an important day for the markets. 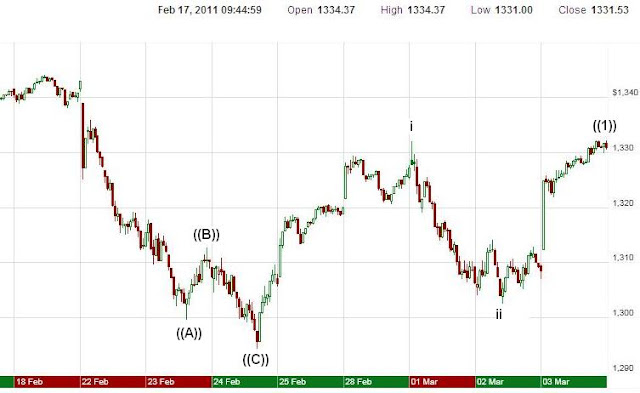 Since the market did not break above February’s high, the bearish count technically remains intact. However my experience tells me it’s extremely unlikely this count will pan out, unless the market tanks hard tomorrow to erase today’s bullish move. The correction for Micro wave ((2)) is now too long and deep for my comfort, and the fact that the bears flexed their muscles last week and created all kinds of bearish evidence and yet still could not defend this week’s highs tells me the trend is still up.

So it’s quite possible the decline last week was a Micro ABC, and this week’s action is part of a 1-2 sequence (i and ii). We’ll know soon which count is correct. I’m on the sidelines for the moment, but follow through higher tomorrow would probably get me in on the long side.

Last week I showed this chart with the big daily bearish engulfing candle. Today you can see that this bearish formation has now been erased. It blows my mind how many times the bears get great setups in wave counts, optimism, momentum, and basic chart studies and yet the bulls come in and erase them all with ease in short order. But hey that’s the market, and that’s also a sign that the trend remains firmly up. I’m not getting in this market’s way on the short side unless the bears can step up Friday.

Breaking News Bulletin: News Is NOT the Main Driver of Stock Market Trends 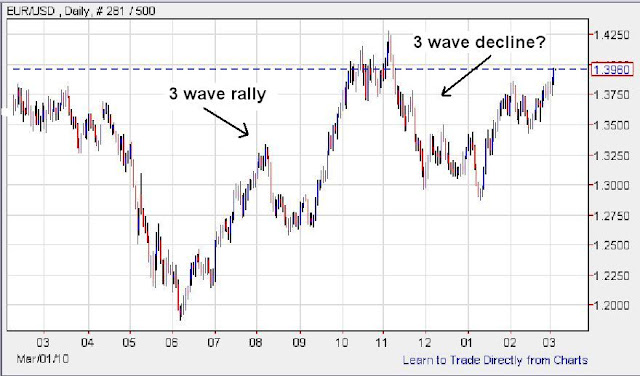 The euro has been flip flopping all over the place with 3 wave rallies and declines for the past several months now. The big strong moves the past couple days and new high this week leave me thinking 1.4250 will be challenged and broken soon as well. The decline from that area a few months earlier looks more like a 3 wave move than a 5 wave move, so I think that area is vulnerable to be taken out at the moment. With the longer term trend still down I don’t like getting long here, but I’m certainly not getting short here while it’s in full bull mode. So much like stocks, I’m on the sidelines for now. 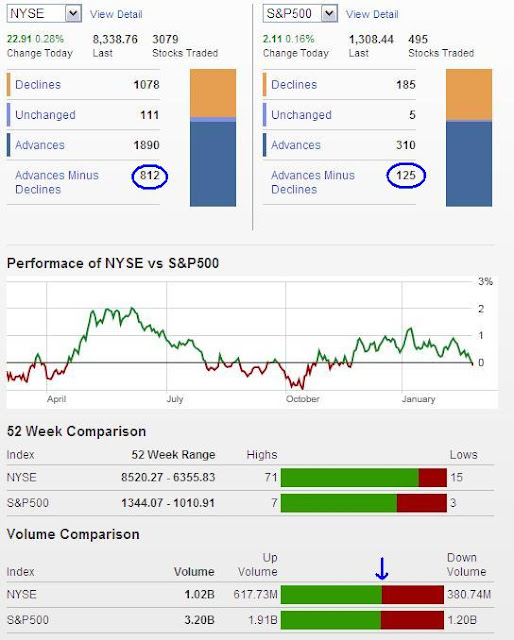 The market had trouble finding its legs today, but with 5 waves down possibly complete right now, the floppy nature of the price action and internals closing quite favorable to the bulls on a flat day, I’d have to say that we’re probably in a bullish correction sequence here, possibly for the rest of the week. Volume was a bit light at 1.02 billion NYSE shares, but despite the bulls’ lack of momentum and the flat close on the day, there were a lot more advancers than decliners on both the NYSE and S&P. Plus, up volume well exceeded down volume on the NYSE. Not exactly a show of force and control by the bears if the short term downtrend is still intact. The internals’ data suggest we’re probably in an upward correction right now that may last a day or two. 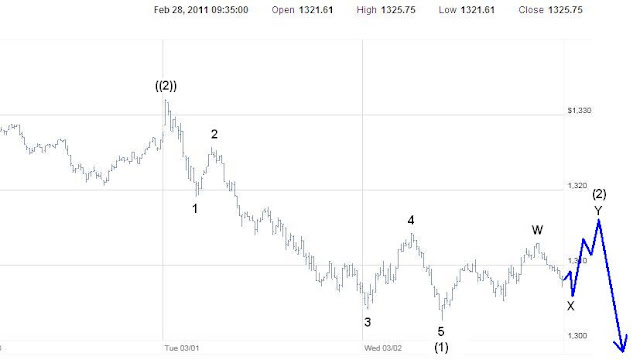 The wave count supports what the internals are telling us. With 5 waves down counted complete, we should get a series of 3 wave moves to complete Submicro wave (2). Right now the 3 wave rally that just completed is too small in price and time to make it likely to have completed Submicro wave (2). Plus with the internals still strong, it suggests more subdivisions higher. I’m projecting a “combination correction” in the form of at least a WXY at the moment. This should take us to the end of the week and possibly early Monday. 1332.09 remains the key level for the short term bears in my view. That level must remain intact for us to have strong confidence that a longer term downtrend is underway.

The euro finally made a new high. I want to stand aside and wait for signs of a top and reversal before I attempt another short position. The larger term trend is still firmly down, but the short term trend appears to be up for the moment. Waiting for the short term bulls to give way to the long term bears again seems like the best option at the moment.

The Evidence is Strong that the Stock Downtrend has Resumed; Euro Looking Vulnerable 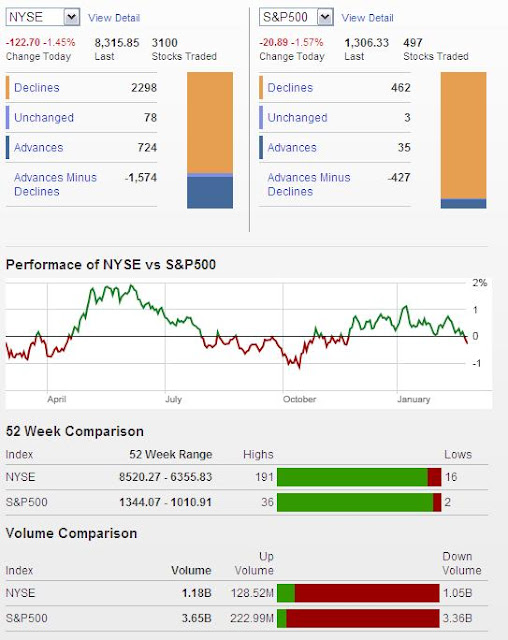 The market fell hard most of the day suggesting Micro wave ((3)) is now underway. Volume was solid at 1.2 billion shares on the NYSE, but not jaw-dropping. Nonetheless, down volume crushed up volume, there were 1,574 more decliners than advancers on the NYSE, and 427 more decliners on the S&P. So quite a bearish day internally, and after a trailing off bullish push the past couple days, it looks like today’s action was a sign of a trend change to the downside now. 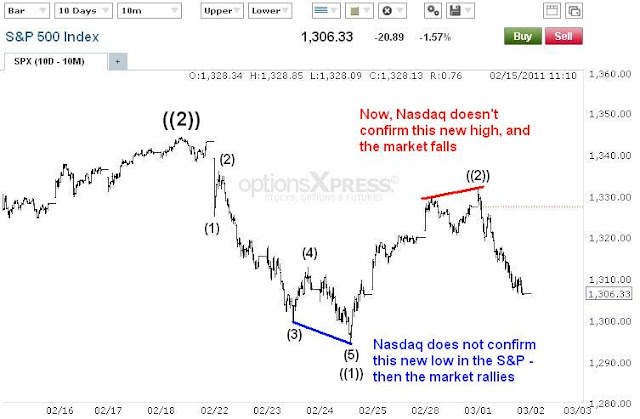 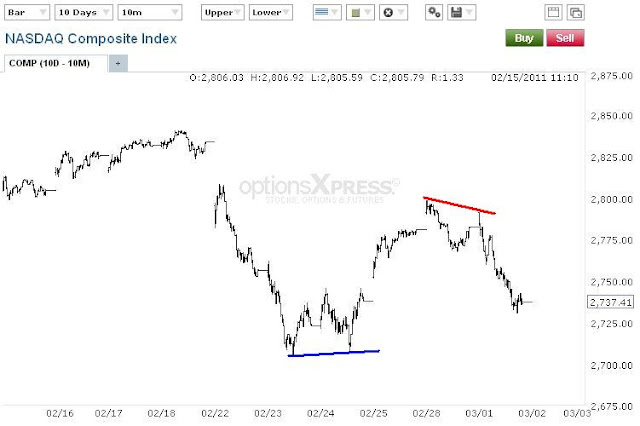 The S&P stopped just shy of the 78.6% Fibonacci retracement level I mentioned yesterday. The target level I wanted to get short was between 1315-1320, and anything above. So far, that call is in the profit. I would like to have my stop just above today’s high. But more conservative traders might want to keep their stops just above 1344.07 until we get a new low beneath 1294.26.

In reference to last week’s lows in stocks, Monday I said, “The Nasdaq Composite did not confirm the last new low in the Dow and S&P and the market has been in rally-mode ever since. I'll be looking for another such divergence, only reversed, to mark a top.” Today we got that divergence I was looking for. You can see from the red lines on my S&P and Nasdaq charts (blue lines mark the divergence at the low). Divergences like these often accompany reversals in trend. So here’s another check market to put in the bearish column. 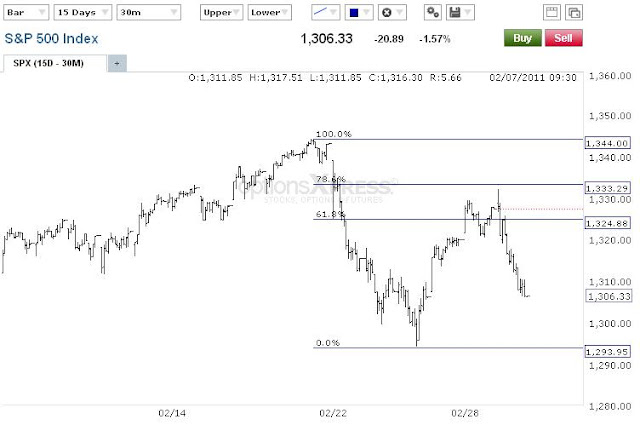 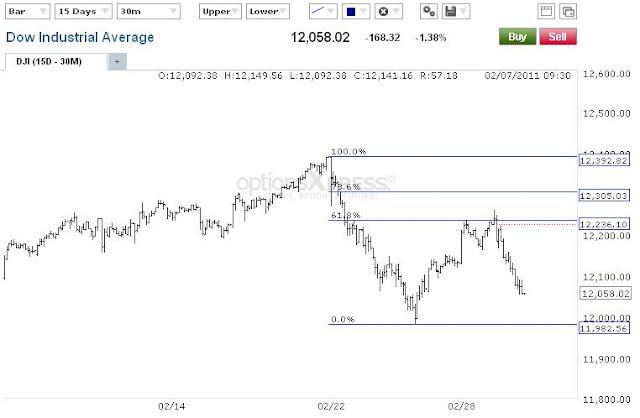 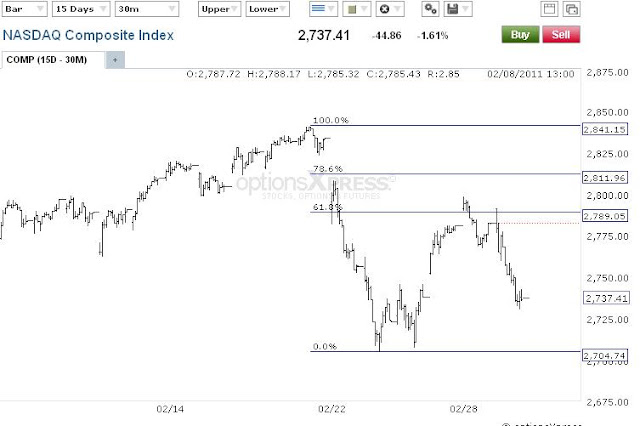 As you can see above, the Dow, S&P and Nasdaq Composite all topped out between their 61% and 78% Fibonacci retracement levels. These two levels are textbook EWP typical stopping levels for second waves. So again, the evidence mounts on the bearish side. 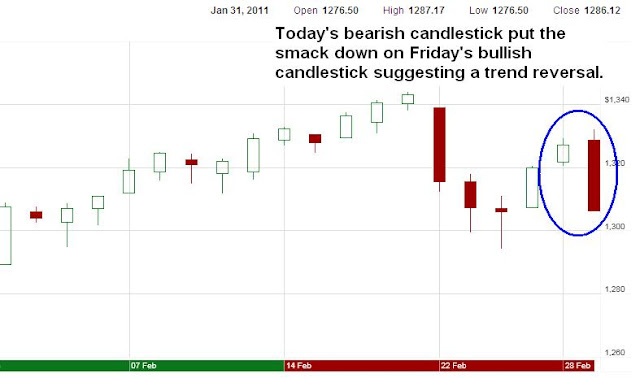 Lastly, today’s daily candlestick in the S&P created a huge bearish engulfing pattern where today’s high was above the previous candle, and yet today’s close was below the previous candle’s intraday low. This pattern often occurs at reversal points as well.

So there you have it, on a silver platter….ready for the bears to gobble it up. Nothing is guaranteed in this business though, it’s all about probabilities. And right now the probabilities definitely favor the bearish side. So I would still trade cautiously and with a solid risk management plan. No matter how good the setup is, it can still be wrong…..plan accordingly.


When You FEEL the Elliott Waves, Your Eyes Become Wide Open
How the waves of social mood led to an investment method worth looking into
-Elliott Wave International 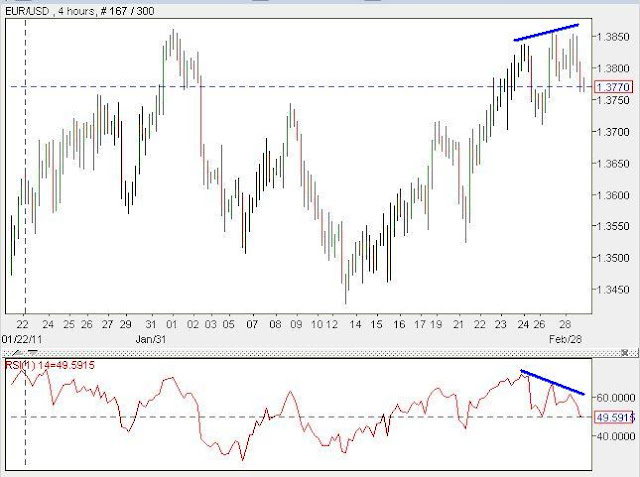 Still no new high for the euro, yet the US dollar has made a new low. Looking at how weak the euro’s price action has been this week, supplemented by the diverging RSI on the 4 hour chart, it looks like this pair might not make that new high. But I don’t want to jump the gun here since I don’t have any evidence of a top in the euro. So I’ll wait for a close below 1.3700 before I get short again. But looking at the price action here and the overstretched rallies in oil, gold and silver, I think a close below 1.3700 will happen sooner rather than later. 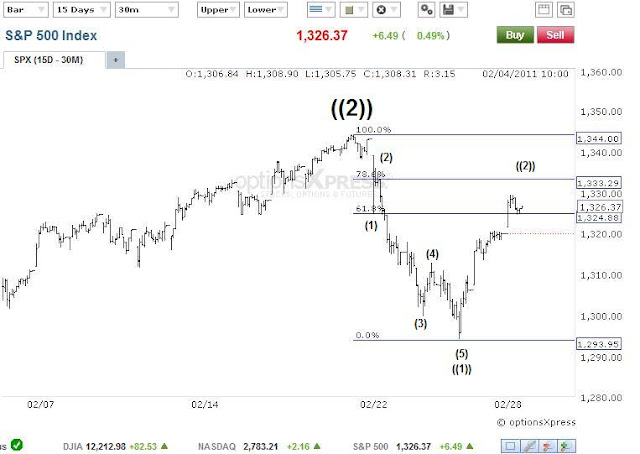 The market has rallied as expected.  The Nasdaq Composite did not confirm the last new low in the Dow and S&P and the market has been in rally-mode ever since.  I'll be looking for another such divergence, only reversed, to mark a top.  Above you can see the wave count and that the S&P is in between two common fibonacci levels for 2nd waves to stop at (61% and 78%).  Internals today are still quite strong but it's too early to just give it all to the bulls the rest of the day.  I'll be looking for signs of a reversal both internally, and in the price action today. 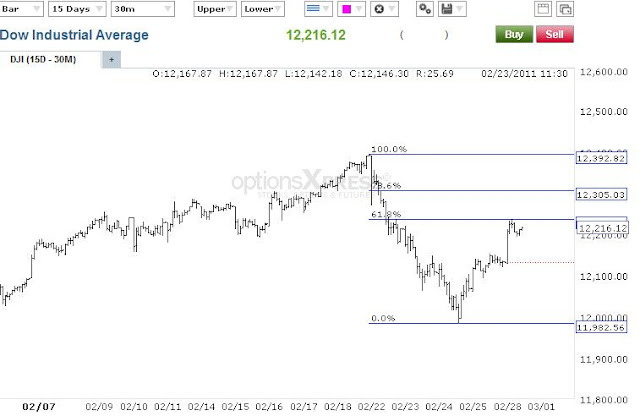 The Dow on the other hand is having trouble getting above its 61% fibonacci retracement level suggesting this index may be topping right now.  I don't see any other signs of that at the moment though, so this behavior here is simply just something to watch at the moment.  The S&P might want to push into its 78% retracement level which should get the Dow to a new high on the day, so calling "top tick" here doesn't seem wise.  But the behavior both in price, internally, and momentum is worth watching in the indices right now since they are in fact at levels that normally market tops and reversals if the larger trend has indeed turned down.

When You FEEL the Elliott Waves, Your Eyes Become Wide Open
How the waves of social mood led to an investment method worth looking into
Elliott Wave International 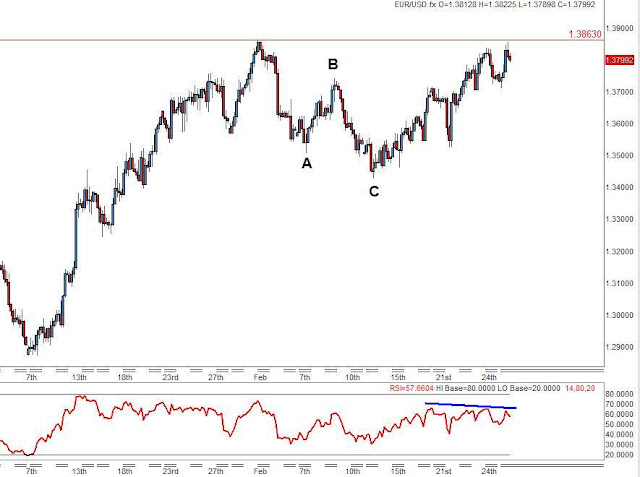 As I've said before, the euro is not tracing out clear elliott wave patterns so I'm stuck with the basics on this pair.  Seeing a 3 wave drop 1.3863 it is clear that at least one more new high above that level must be achieved before looking for a top and reversal.  The pair made it within pips of making that new high last night, but so far is left just shy of doing so.  I still think we'll see another push to above 1.3863, although coming below 1.3700 would put that into some doubt.