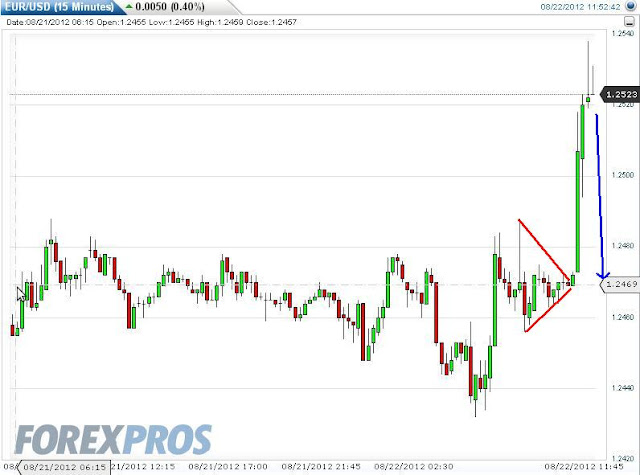 The consolidation and thrust on a news event (the Fed), suggest the previous EUR/USD structure is a triangle with the current thrust as the result of that triangle.  EWP suggests that once the sharp thrust is over, it will return to near the apex of the preceding triangle.  That area is 1.2469.  So I'm shorting into this rally, adding more as it surges higher but keeping my overall position manageable since there's no clear risk level to put a stop.  I'm just watching it closely.  The reversal to 1.2469 should happen soon, within a day.

It will be very interesting to see how the euro and stocks close today.  A nice reversal on a Fed announcement is usually a good trading opportunity. 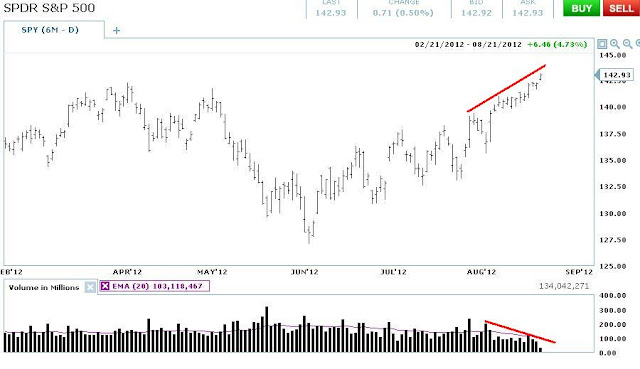 The S&P and Nasdaq 100 pushed to new highs, breaking the EWP count once again.  The Nasdaq Composite and the Dow have not made new highs but should do so shortly.  If not, it will leave an intermarket divergence in place, and when accompanied by waning momentum, volume, and the Dow Transports failure at a new high, it would spell disaster for stocks in the short term at least.  If all these markets confirm the highs in the S&P and NDX, then look for continued rallying for the foreseeable future.  There are no signs of a top here, just steady buying in a light volume market where the Fed is buying futures and pushing brokers to buy up the market (enter conspiracy theory here).  It's tough to fight the government, so for the most part I choose not to.  I see no reason to get short here in anything other than a tiny options position where my risk is clearly capped and with the understanding that it is basically just a gamble which I rarely do.  Momentum is just so weak on this rally that this market can give way at any point, so I don't want to get long.  I think it's best to just wait it out until evidence presents itself to take a position, or simply put money in other markets that I can better analyze and project.  Like the euro: 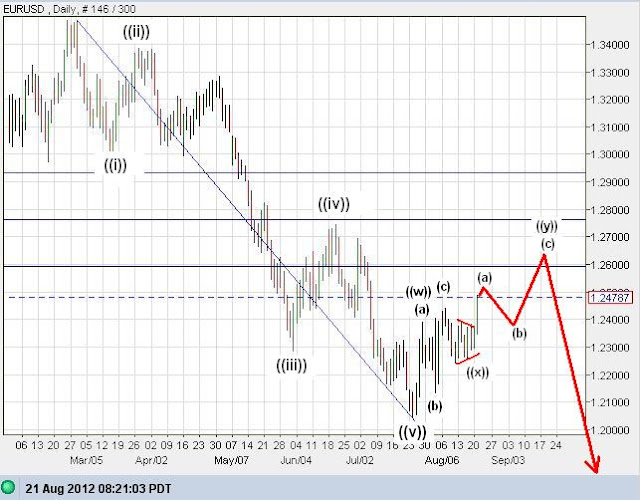 The EUR/USD thrusted from a triangle last night, and judging from the structure preceding the triangle, it looks like the triangle was an ((x)) wave (according to EWP, a triangle only occurs in 4th, B and X waves).  That means the thrust higher right now is a wave (a) which will be follwed by a pullback to around the ((x)) wave triangle apex for wave (b), then one more final rally for wave (c) of ((y)) where the EUR/USD should form a major top.  Fibonacci retracements and the prior 4th wave converge around the 1.2700-1.2800 level (my lines on the chart above are not exact projections), so I'll be looking for a reversal in that area to establish short positions.  Keep in mind that the larger trend is firmly down though, so surprises will be to the downside.