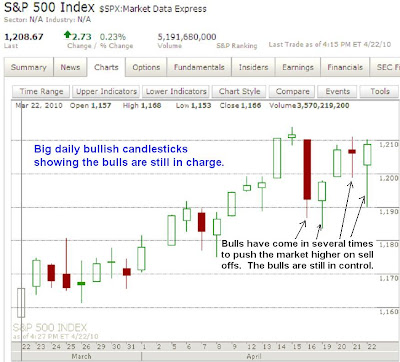 The market extended its correction lower this morning to complete the WXY double zig-zag correction I mentioned yesterday, then it proceeded with its larger uptrend with a huge surge higher this afternoon. Today's action creates yet another bullish candlestick on the daily chart as you can see in the above S&P chart. The bulls are in full control as any sell off in the past week has been stopped by the bulls and pushed higher. You can see this by the long wicks on the underside of the candlesticks in the above chart. It shows a lot of bullish support around the 1190-1200 level in the S&P. The bulls are still in control. For this bullish indicator to be invalidated, and to possibly signal a reversal in trend to the downside, I'd need to see a close beneath 1184. Until then, this candlestick pattern paints a bullish picture. 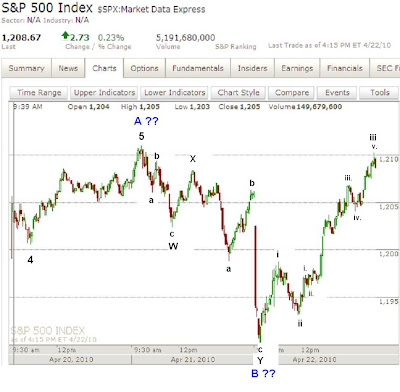 The above wave count is not ideal, but inside a larger correction wave counts aren't often ideal anyway. Today we completed wave Y of a WXY double zig-zag correction that I have tentatively labeled a larger wave 2. We are now in wave 3 which means lots of bullish pressure much higher from current levels. Without aggressive buying tomorrow and early next week, it will call this wave count into question. But with declines falling in 3 wave segments and rallies unfolding in 5 wave segments, the larger trend appears to still be up. I don't feel this small correction this week was enough to fully alleviate the overbought condition of this market, so I doubt I'll get long anytime soon. A new high on the year probably just means the most recent rally is just extending a bit higher. A new high on the year in the S&P will stop my short position out and put me back to neutral, but I'll still be on high alert for signs of a reversal to get back in short. 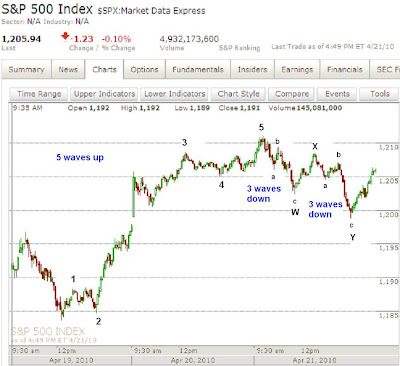 Unfortunately the market has not wanted to fall and appears to still be in "bull mode". Notice the above 5min S&P cash chart. We have a nice 5 wave rally followed by 2 three-wave declines I labeled as a WXY combination correction. Going up in 5 and then declining in 3s is basic EWP stuff and suggests the larger trend is up. There are a series of lower lows and highs that have formed so until that trend is broken the bears can hope for the best. But the evidence right now suggests further rallying ahead of us. If the 5 wave move is correct, then it's probably a wave 1 and we're about to see a very strong wave 3 up anytime now. So if I see strong internals and volume along with price strength tomorrow, I might be inclined to jump on the long side for a short term trade. But we'll have to wait and see how the market reacts.

So we're basically at a fork in the road where the next big move in the market should tell us where the larger trend is going and I can jump on board with a position accordingly. Right now, the evidence supports the bullish case with the 5 wave rise and 3 wave declines following it, but the risk/reward favors the bears at this point. I'm currently still short but will stop out when the S&P makes a new high. When that happens, I'll look at the internals of the market, if they're solid then I might take a long position.

Market Running Out of Room to Rally 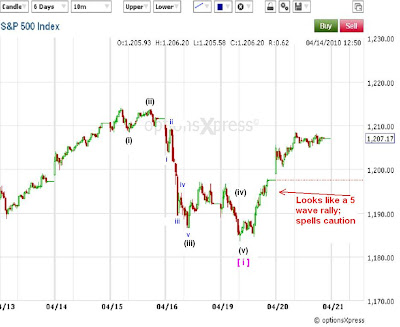 Well I thought we had a small completed 5 wave rally at yesterday's close, suggesting we'd have an ABC zig-zag correction higher where waves A and C would be composed of 5 waves advances. So yesterday I thought that 5 wave advance was wave A. That was clearly not the case as the market just charged higher all day today with strong internals and volume. The bears were non-existent. So it was a good day for the bulls. But one strong day doesn't mean the bull run is on now for the next several weeks as tomorrow can easily reverse all the bullish action today. But it needs to do it quick because we're running out of room to the upside here to still consider this count correct. Yesterday I said the Dow completed 3 waves down, suggesting its drop was just a correction and that a new high might be in the cards. The Dow is almost there. But the other indices still sport the 5 wave drops so I'm not sure a new Dow high will be followed by the other indices. What is concerning though is that the rally from yesterday into today looks a lot like a 5 wave advance, and Apple earnings are getting everyone excited again, so it seems likely this market will continue higher early tomorrow morning. But, until the S&P makes a new high on the year, the other bearish evidence remains in place and sets this market up for further losses.

Market Correcting in a Wave [ii] 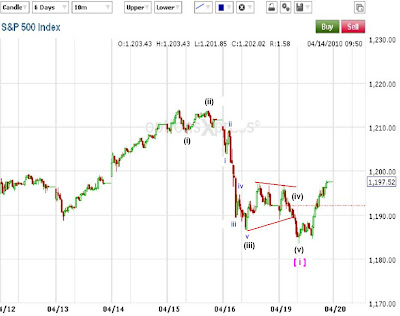 The S&P and Nasdaqs charged to new lows today making nice 5 wave declines In the S&P, the 4th and 5th waves are tough to label, but the ugly triangle I have above is a good start for now. Today the NYSE had more decliners than advancers and just a bit more volume to the upside than downside with the Nasdaqs and Russell 2000 small cap indices struggling despite the Dow's strength. So it was quite a lopsided unhealthy rally from the lows and not an across the board bullish run higher; something we'd see in a correction, not the start of a fresh new bullish surge. Looking at the above S&P chart, it's possible that wave [ii] ended this afternoon since it rallied to a common retracement level just above the previous wave 4. But it's quite sharp and looks like a 5 wave move, suggesting that it needs to subdivide further and higher before it tops in wave [ii] and reverses. Also, the action in the Dow also suggests further upside. 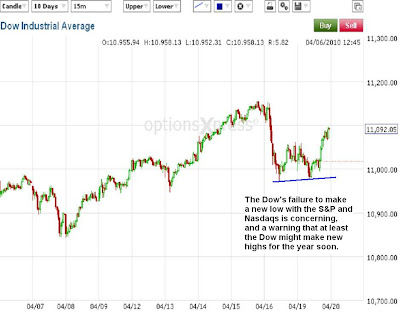 An element of caution is warranted for the over-aggressive bears since the Dow has been resilient to the decline so far, and especially was quite strong today. It did not make a new low for a 5th wave like the Nasdaqs, S&P and Russell did. This leaves a 3 wave decline for the Dow. Now the weak internals today make me think the Dow is not leading the market higher at all and that people are just fleeing to higher risk assets and putting them into the solid blue chip companies in the Dow for protection; hence the reason the high risk Nasdaq Composite and Russell closed down today despite the Dow's strong showing. So it's possible that the Dow may eek out another high while all the other major indices do not, and then the market reverses lower for the S&P's wave [iii]. Right now, that's my best guess at this point. My current short positions will stop out if the S&P makes a new high on the year, but if it does, I'll have my finger on the trigger to re-short real quick on the next signs of a top because just a two day mild drop is not enough to alleviate this massively overbought condition we're in right now. So I'm short term bearish as long as the S&P's highs on the year remain intact, and know that my gut will be tested in the short term as the Dow's telling us the market will rally further in the very short term.