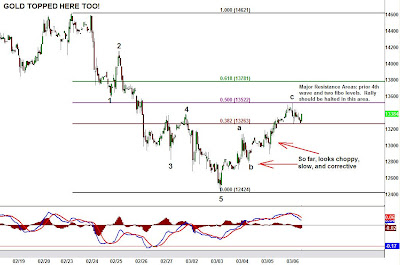 Here's an updated silver mini 1hr chart showing the rally stopping exactly on the 50% fibo retracement level. The MACD has been declining since almost the very beginning of the rally from the low at $12.42. Gold's momentum indicators are extremely bearish as well. On an intraday basis, gold made 3 slight new highs on Friday but silver actually made 3 new lows! This divergence says "TOP" all over it. I'm heavily short both gold and silver and expect them to plummet soon.

Do the percentage calculations on those moves and you'll see why I'm so excited about these two trades.

As for the stock market: I have very very small call options in place that I'll let run until their expiration in April if there's not a significant rally. Other than that, I'm standing aside and waiting for signs of a huge rally. The risk of staying short is too great because it's way too crowded a trade right now, and getting long now trying to catch a bottom is a fool's errand. So I'm waiting for an opportunity.
No comments: 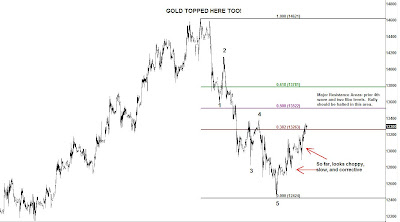 While I was wrong on the stock market call from last post, I do understand that trying to pick a bottom in a wave 3 down market is a fools errand. I still have some small call option positions in place, but I have no confidence in adding a heavy long position now. The market still looks poised to fall more. And the short trade is quite crowded and negative sentiment extremes are being reached, so the risk of shorting is way too great.

So I look to other markets. Gold and silver look very bearish and very promising. I am short both metals. Silver shows the clearest impulse pattern from its peak. Attached is a 30min mini silver chart show a clear 5 wave drop from $14.62. It's now correcting that drop. If I'm right, it should be on its way to breaking its previous low at $8.47. So that's a 36.5% minimum fall from current levels ($13.30). The maximum stop loss area for this trade is the previous high at $14.62. So I'm risking 10% to make at least 36.5%. That's a risk/reward on a high probability trade I'm all over.

The rally should halt around the $13.26 - $13.80 area. Once it tops and reverses again, the fall should be huge, fast and furious because it should be a 3rd wave.

I'm short silver and gold with a medium sized position.
No comments: 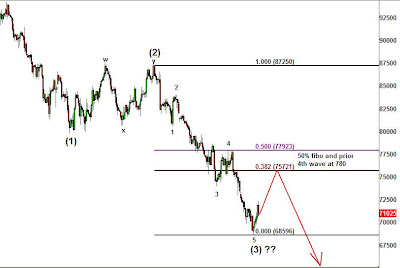 Just thought I'd add my 2 cents with this S&P futures 4 hour chart. It appears like a 3rd wave, within a larger 5th wave, completed yesterday and is now rallying in a wave 4. So far there are only 3 waves down but the past couple large 5th waves over the past 18 months have actually fallen in 3 waves and kicked this elliotician in the twins a couple times already. So I'm on guard for this to happen again.

The chart above shows a prior 4th wave area in the 38%-50% fibo levels at the 750-770 area. If it is a 4th wave, I will probably go heavily short against a tight swing high, and purchase April or June call options for protection. If a triangle appears to form, I think I'll sell March or April options against a short position to try and collect some premium before it thrusts to a new low. Either way, I won't get aggressively short as this is a bit late in the game and the larger structure should be ending any time now and large ferocious rally should ensue for several months, at least.

Gold and silver look to have topped and their 2008 lows should be broken in the coming weeks before they make new highs from 2009.
No comments:
Newer Posts Older Posts Home
Subscribe to: Posts (Atom)