February 9, 2012: I don't have anything new to add. The Dow made a new high while the S&P has so far lagged behind, failing to exceed 1370.58. If a reversal occurs with the S&P failing to make a new high above 1370.58, then there would be a major intermarket divergence in place suggesting a major top had formed. But entering short prior to that is purely speculation in my opinion. I'm waiting for a reversal pattern to form, and if it occurs before the S&P can exceed 1370.58, then I'm jumping in big on the short side. Until that happens, I'm simply waiting, doing nothing but trying to determine if it's possible to twiddle my thumbs long enough to burn off the two donuts I ate this morning, and to see if I can twiddle them fast enough to break the sound barrier. 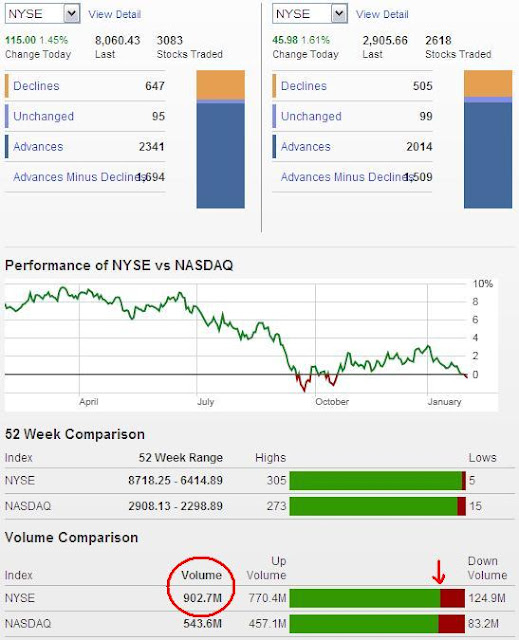 Internals illustrate a typical Friday behavior where volume is fairly soft and a large majority of up volume accompanied the rally relative to down volume.  Nothing conclusive here since price moved right in line with these internals as would be expected. 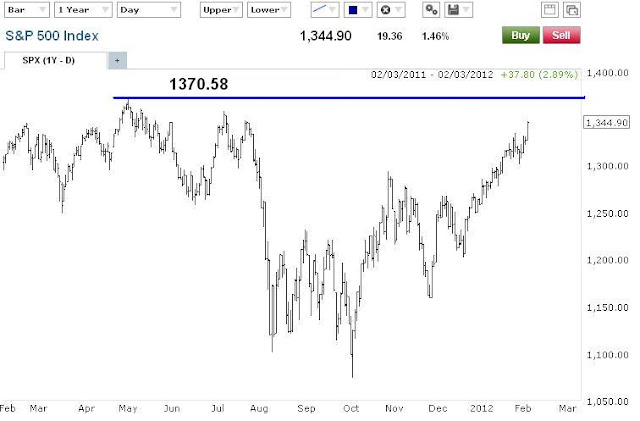 I thought today would be a great day for a nice reversal to the downside and hopefully leave a setup to either short today, or early Monday.  But Mr. Market wanted to annoy me today, and he succeeded.  The rally remains intact and I see no reason to "guess" and just short here unless you're a gambler.  I'm waiting for evidence of a reversal, and will load up on the short side upon confirmation of a reversal if it's not too late when that happens.  The market is moving higher, contrary to what the evidence I see suggests it should be doing.  When this type of thing happens, I want to simplify things and focus on the bottom line.  The bottom line is that 1370.58 is key to the bearish wave count, and the bearish case as a whole.  The Dow came within just a few points of exceeding its wave ((2)) high today, so things are a bit shakey for the EWP bears right now.

But as along as 1370.58 in the S&P cash index remains intact, the bearish wave count remains valid and so any good sign of a reversal on the short term charts is worth taking a shot at the short side with a stop at the day's high, or just above "the Rubicon" level at 1370.58.  A perfect scenario for the bears would be for the Dow to exceed its wave ((2)) high Monday while the S&P stays below 1370.58 and then a big reversal occurs.  This type of divergence in two major indices would be deadly bearish. 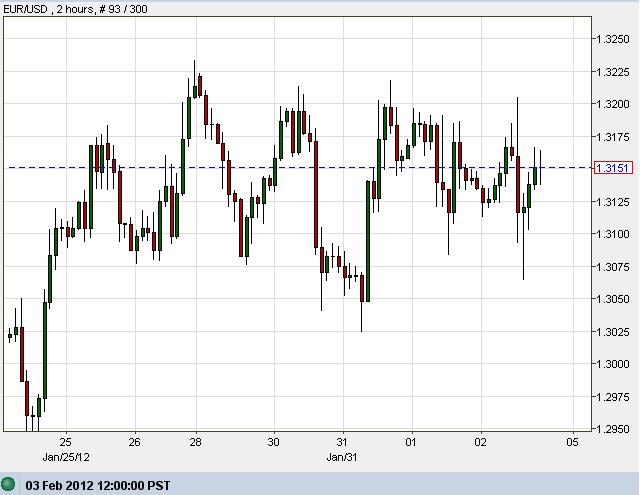 Although the euro has been able to make a new low and has not been able to make a new high, there has been no follow-through to the downside.  As a result, there has been a net sideways action the past week or so.  This consolidative pattern conveys a similar message that an EWP triangle conveys; which is that the euro is pausing from its uptrend before it thrusts higher in a sharp and deliberate move to new highs.  Now since this is not an official EWP triangle the euro has formed, so I can't say the thrust to a new high will happen with any level of certainty.  But I will say that the odds are slightly tilted toward the bullish side for right now.


PLEASE NOTE: THIS IS JUST AN ANALYSIS BLOG AND IN NO WAY GUARANTEES OR IMPLIES ANY PROFIT OR GAIN. THE DATA HERE IS MERELY AN EXPRESSED OPINION. TRADE AT YOUR OWN RISK.
10 comments:

Thursday, February 2nd note: I just wanted to touch base with a quick note to state that I see no new developments in the market since my last post, as seen below. The market continues to be "on pause" it seems and has been in this mode for quite some time.  The general malaise in the market for the past few weeks still tells me a big move is coming soon.  And the evidence suggests that this move will be to the downside. The euro has made a new low and although the recovery was deep, it still failed to make a new high.  Now a series of lower highs are in place, which is the definition of a downtrend. Unfortunately, the moves are almost sideways and there's no follow-through to the downside at the moment.  So it doesn't give me much confidence in calling a top at the moment. I'm currently short the euro, but I wouldn't doubt a sharp new high is around the corner with the action the way it is, so I'm managing risk accordingly. I'll be back with new info as it arises. 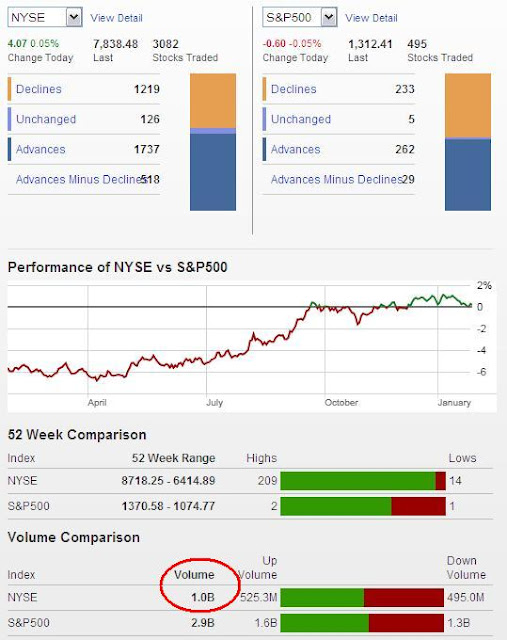 It's tough to write new blog posts when not much has changed since the last post.  It's tempting to create drama where it doesn't exist, or to overthink simple setups.  I'll spare you from both.  This post is simply to add on to the previous post and mention the few new developments since then.

Today actually saw small spike in volume that's worth noting.  NYSE traded just over 1 billion shares which is far from jaw-dropping, but certainly strong relative to volume the past few weeks.  Unfortunately, the market closed mixed with some indices up and others down on the day.  Since this behavior is occuring at the end of an uptrend, it's reasonable to think that this indicisiveness and volume is the result of a top forming.  So we'll see.  But volume possibly re-entering the market now means we should get some moves of significant - finally. 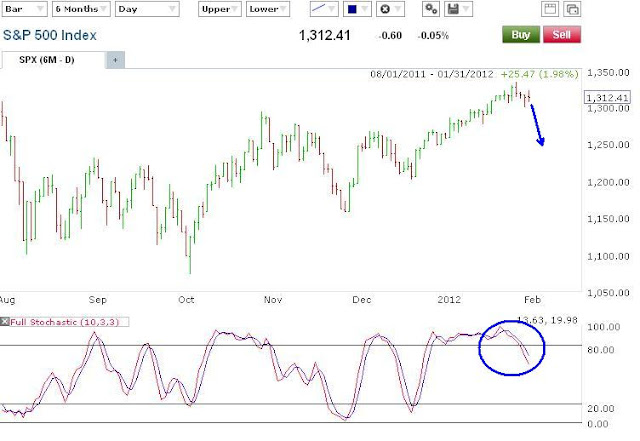 The daily stochastic I've been talking about the past few weeks has finally started trending down.  Prices are now certainly free to follow.  This is quite an elementary indicator, but one of many in the toolbox, and I'm using it strengthen the other bearish evidence I've laid out, as well as illustrate how momentum appears to shifting to the downside.

Credit Crisis: Are We Set Up for The Perfect Storm? 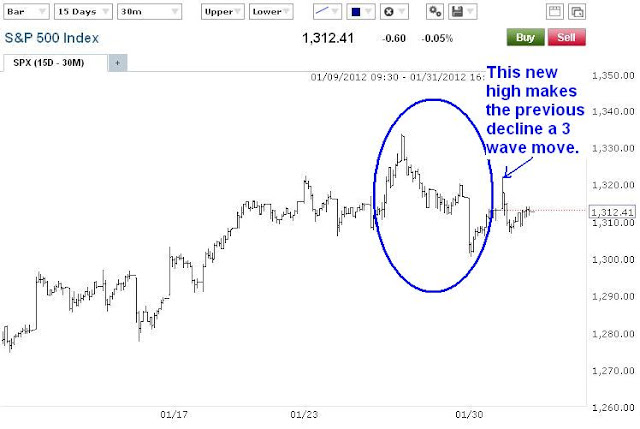 There is certainly a lot of evidence for a top and reversal at any moment, and there has been for weeks in my view.  But unfortunately on a short term basis EWP does not support a top being in right now.  This is because the recent pullback looks like a 3 wave drop, and it didn't get a chance to subdivide into an impulse move since today's rally broke above the previous high, which cemented the 3 wave structure in place.  This is not a death blow to the bearish case, it's just a short term indicator that suggests a top may not be in right at this moment.  So it keeps us honest, and as always, it keeps us managing risk appropriately. 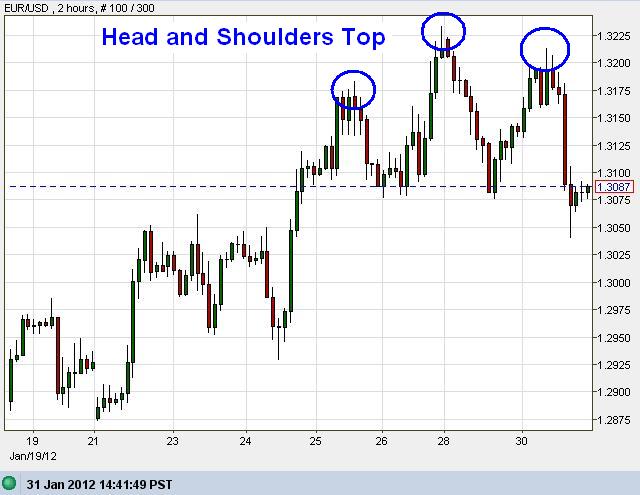 And lastly, and certainly not least since this is probably the most significant development of everything I follow.  The EUR/USD appears to have formed a head and shoulders top and has broken beneath the neckline today.  The uptrend has been broken and now the bears just need a little follow-through to the downside to be even more confident that a top is in.  I've already entered a short position with a stop just above today's high.  Any rallly that stays below today's high will only get me to short more.

If the euro has topped, it's most likely entering a very bearish phase and will move sharply lower from here.  This also lends itself well to a top forming in stocks as well since the two often move in the same general direction.

PLEASE NOTE: THIS IS JUST AN ANALYSIS BLOG AND IN NO WAY GUARANTEES OR IMPLIES ANY PROFIT OR GAIN. THE DATA HERE IS MERELY AN EXPRESSED OPINION. TRADE AT YOUR OWN RISK.
3 comments:
Newer Posts Older Posts Home
Subscribe to: Posts (Atom)