After 5 Waves Down, Stocks and Euro Look to Rebound 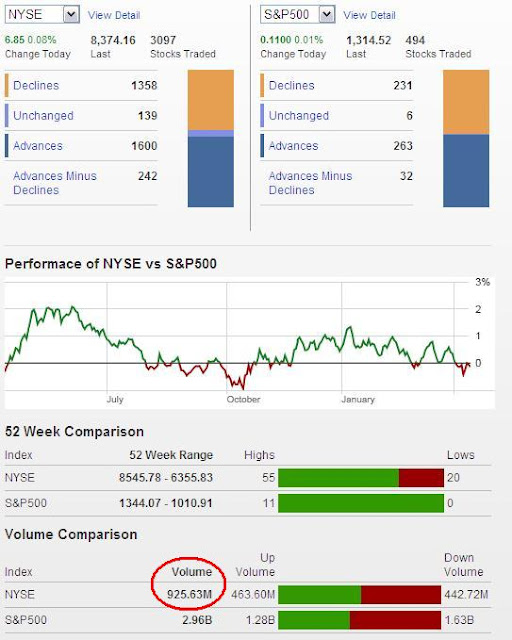 Volume remains light in the market, making it tough to get a definitive consensus of trend. Volume today was still well under 1 billion shares on the NYSE, so although there was a bullish reversal today, the light volume doesn’t make it a convincing reversal…..probably will result in just a day or two of rallying. 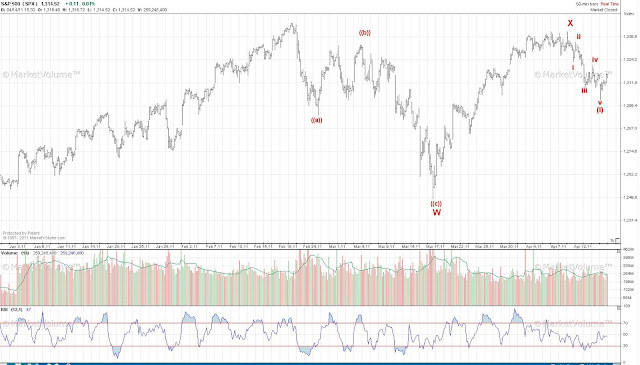 Looking at the wave count I’ve been tracking the past several weeks we can see that things are falling into place so far. I’m unsure of the degrees of trend here since the above degrees don’t fit well into the larger wave count, yet the magnitude of the moves shown here do in fact fit well with the degrees I plugged in here. So there’s conflicting issues here as far as degree goes so remain flexible in that respect.
Today we saw a nice bullish reversal since the market opened very weak and made a new low and then rallied all day and closed in the positive. But the damage has been done to the bulls since a nice 5 wave decline was printed with the action over the past few days. This suggests that the current reversal is the start of wave (ii) that should last Friday and probably at least some of Monday. The market should stay below the wave X high and eventually turn lower sharply with wave (iii) probably early next week. Ultimately, the Wave W low should be broken, which is a significant decline despite it just being part of a correction.
Learn Elliott Wave Principle 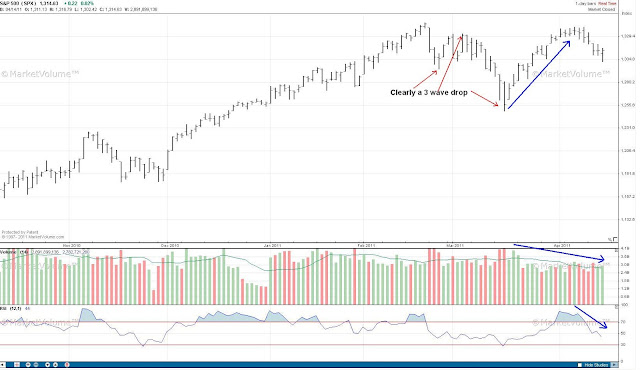 Looking at the daily chart you can see that this latest rally has been done on very weak momentum as shown by the declining volume (also seen clearly on the SPY and NYSE) and RSI. This alone is about enough I’d need to see to be getting very conservative as a bull at a minimum. But I’m not a bull, so I don’t have that problem. The only reason I feel this is just a WXY combination correction unfolding is because the drop from the high on the year is clearly a 3 wave move, which means unless that high is broken then this entire move is most likely corrective all around.
Learn How to Use Bar Patterns to Spot Trade Setups 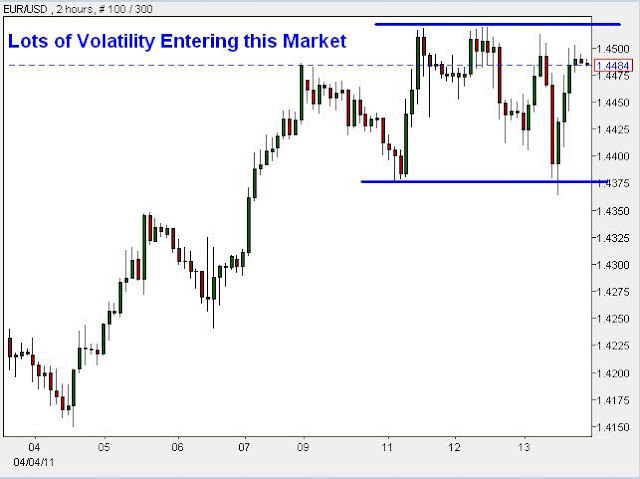 The euro’s wave count eludes me in the short and medium terms. But the long term count shows a clear downtrend. So I have a bearish bias and am currently short right now. The increase in volatility is a good sign a top is near, if not already in. A breakout should ensue soon and I feel that a breakout to the upside will probably be sharp, but short lived and sharply reversed. A breakout to the downside should result in massive US dollar short covering, sending the euro lower in a hurry. So to me, the best place to play this pair is on the short side when opportunities arise.

Stocks Still Floating Around, but the S&P and Euro Declined in Five Waves 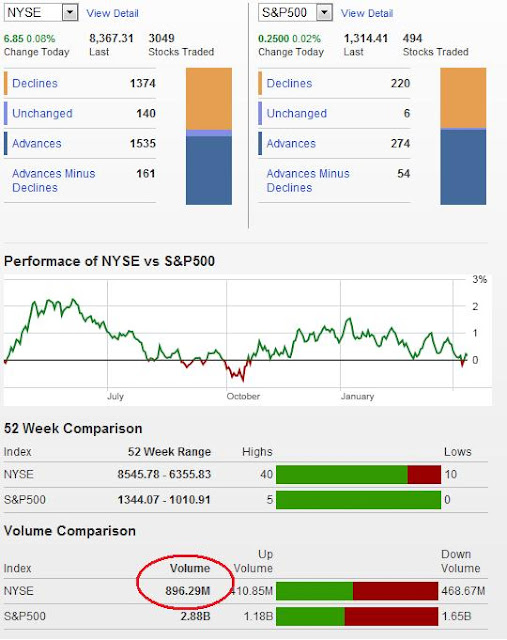 Volume is still light and stocks continue to flop around directionless.  However the wave structure may give us a clue as to a what the larger trend may be.

The S&P eeked out a 5 wave decline suggesting the larger trend is now down.  Unfortunately it's occurring with weak volume and mediocre internals to the bearish side.  So it's not a convincing picture....but it rarely is I guess.  The evidence is strong enough that the rally has exhausted, so I'd short rallies with a stop just above this week's high if I was an aggressive trader.  The market is trading heavy overall, and with a 5 wave decline on our hands, a bearish bias in the short term is warranted. 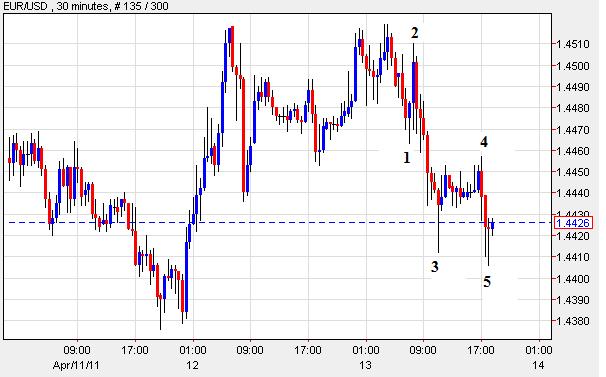 The euro has also declined in 5 waves, although more sharply and convincing than the S&P.  Here too I favor the short side.

Stocks Breaking Down, but Still no Volume 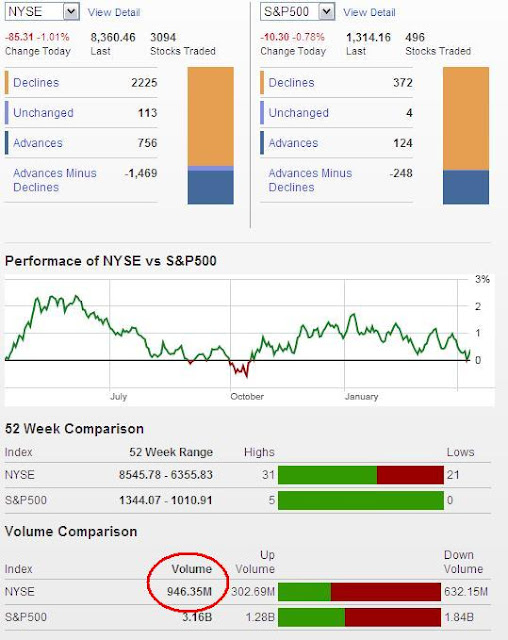 Stocks fell hard this morning, accompanied by solid volume on the decline.  But unfortunately that's all the bears could do.  Stocks rallied on soft volume the rest of the day.  So the closing NYSE volume number today is a bit deceiving since it's very light for the day overall, but what you don't see is that the early decline this morning had strong volume.  I would have liked to see a close today with 1.2 billion or more shares traded, but perhaps we'll get that tomorrow. 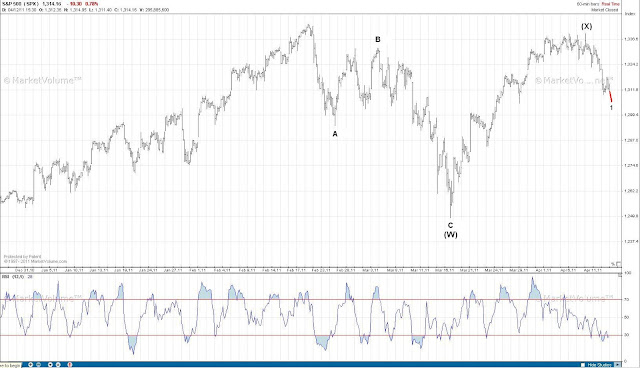 Stocks appear to be falling impulsively but we can't conclude that quite yet.  We still need one more new low to make a nice 5 waves down complete.  But the S&P must stay below 1322.94 to keep the nicely formed impulsive decline intact.

As for the euro, it rallied sharply despite stocks losing ground this morning but then the euro reversed sharply and never recovered.  This looks like a nice reversal pattern and is worth shorting.  So I shorted the euro this morning with a stop at last night's high.

Everything You Ever Wanted to Know About the Elliott Wave Principle, Free 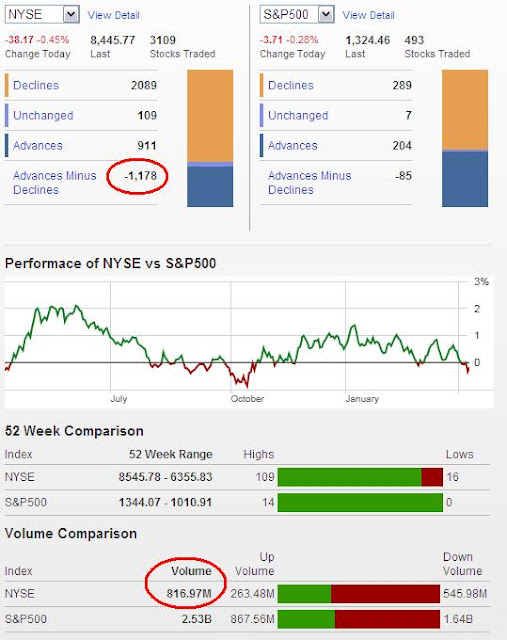 I’ve been talking about how weak the rally looks internally the past few weeks and how I’m looking for volume to re-enter the market to give us some momentum in either direction.  I didn’t want to take a position randomly because I know how the market can easily just float higher and higher and higher on light volume for several weeks.  And that’s exactly what it has done.  But now the daily price action is starting to match the weakness the internals have shown the past few weeks.  Today’s internals continue that trend with a measly 817 NYSE shares traded, but decliners well exceeded advancers by 1,178; a bearish indicator here.
When volume returns, it should move this market sharply.  If it shoots higher with that volume, I believe it would be a capitulation move, not the start of the next rally leg lasting months.  So it should be capped and reversed in fairly quick order.  I wouldn’t short into the rally, I would simply get out of its way and let it run its course and wait for signs of a top.  Then I’ll try shorting against a recent swing high.  The other option is that the market just shoots lower from current levels either Tuesday or Wednesday this week.  If so, and volume increases on the decline, I’d short into that weakness.
Earnings Season: Strong Earnings Mean a Strong Stock Market -- Right? 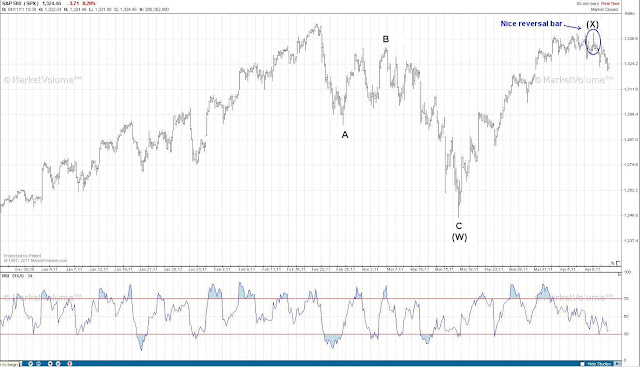 With a clear 3 wave drop from the high on the year the only accurate way to count this is an ABC decline within a larger correction, most likely a WXY combination.  The market should soon be undergoing another 3 wave drop to form wave (Y).  Making a new high on the year would negate this count from contention and most likely mean the 3 wave decline was simply an ABC zig-zag correction within a larger 4th wave.  But under this scenario, the market would soon top and reverse anyway.  So I favor the short side now and am looking for an opportunity to get short.
Everything You Ever Wanted to Know About the Elliott Wave Principle, Free 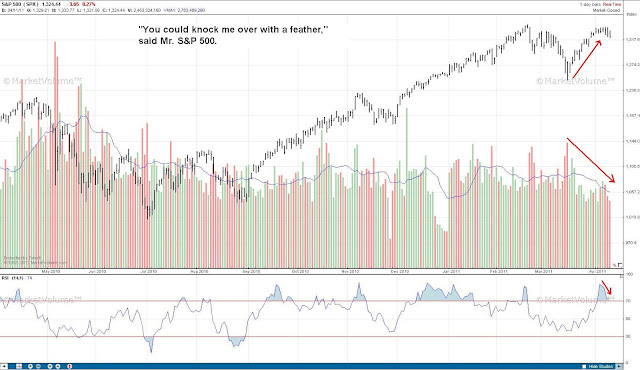 The daily S&P chart tells a grim picture for stocks.  Volume has fallen significantly as the market has risen, suggesting the rally has little teeth to it and that it’s most likely just a correction [which I’m labeling Wave (X)].  Also notice the RSI has already reversed and has been headed lower for days while price has consolidated.  I can’t emphasize enough how weak this market looks right now.  But without any solid evidence of a top, we have to expect it to float higher….and continue to wait. 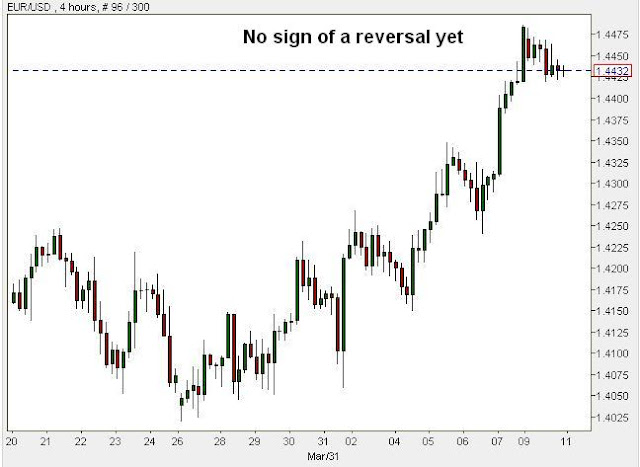 The euro count eludes me for the short and medium terms.  The larger downtrend count remains intact though so I want to look for shorting opportunities.  A reversal day, sharp decline and/or an impulsive move lower would get me to attempt a small short position.  Aside from that, I’m on the sidelines here.