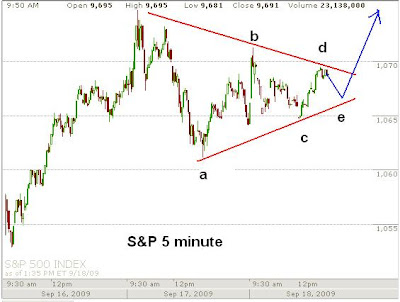 On the 5 minute S&P chart, along with other indices, I see a triangle possibly forming (see above chart). If the market declines a little bit more it will complete wave e where it can then thrust sharply to new highs later in the day.

What's key is that according to EWP, trinagles are "terminal moves". In other words, they are the result of a tiring trend that will completely reverse once the thrust is over. If correct, the market will thrust sharply higher later today. Once the thrust is complete, a top should be in place. But a break of wave c at 1064 would hint that top may already be in.
No comments: 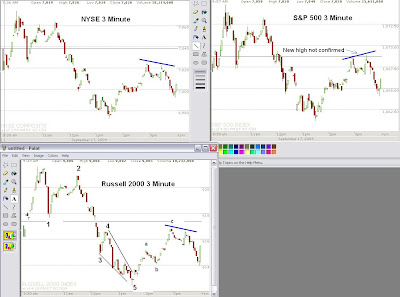 Today was an interesting day in the stock market because many indices and assets are at perfect "topping points", but my confidence in a top being established now was very low. This is mainly due to yesterday's strong rally in stocks on the heels of the strongest breadth in weeks. This usually suggests an undercurrent of bullishness for stocks that caries on for several weeks. This of course may still happen, but there was absolutely no follow through today, despite all the good economic news that came down the wire today.

It's possible to label the declines in the major indices today as a 5 wave drop followed by a 3 wave a-b-c rally(see bottom chart of Russell 2000 above). The NYSE did the same and closed substantially weaker than the Dow which closed almost unchanged. Now the Dow, S&P and Nasdaqs all made a new high late in the day (see S&P chart on top right) however this new high was not confirmed by the NYSE and Russell 2000 indices (see above charts with blue line depicting the divergence). Now these are 3 minute charts so this analysis does not instill much confidence in a top being in place at all. But with the lack of follow through on yesterday's rally, the selling on good news that happened late this morning, the negative breadth that transpired today, the arguable 5 wave decline in most indices, and the minor divergence left late in the day, do in fact lay the ground work for a possible top and reversal to be at hand. The EUR/USD and gold and silver also reversed today and closed much weaker, and the GBP/USD continues to be much weaker than the EUR/USD. What's easy is that it won't take much to prove this analysis wrong. A simple rise in the Russell 2000 to above 616.79 and the NYSE above 7023 would negate all this and open the door for another strong rally to new highs.

Tomorrow is option expiration day and so a lot of volatility in the morning and at the close is likely. If the market wants to charge higher, most likely it break those key levels I mentioned in the Russell 2000 NYSE Composite within the first 30 minutes of trade. If not, prehaps something bigger is at hand.
4 comments:

Nothing new to report other than yesterday brought strong buying demand to the stock market that signals bullish momentum in the near future. This will be negated if we get a sharp reversal today or tomorrow though. The market is rallying quite healthy, no divergences or laggers. I've said many times that the EUR/USD has been following the stock market and when it tops, so should everything else. The divergence between the EUR/USD and the GBP/USD holds true still, and the EUR/USD poked through a slight new high from December's completely what's most likely a flat correction. It could extend higher of course, but minimum expectations have been satisfied and I'm on alert for signs of a reversal, i.e. five waves down, sharp selloff, etc.

When the EUR/USD tops and reverses, it will signal that precious metals and equities have probably topped as well.
No comments: 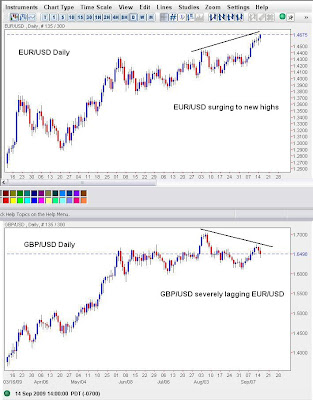 The EUR/USD appears to be forming a major top as I stated in a previous blog post. If you look at the above daily charts of the EUR/USD and the GBP/USD you see a major bearish divergence showing here. As the EUR/USD has surged to new highs the past week, the GBP/USD is severely lagging. If this divergence holds and a big selloff occurs, it will solidify the position that the EUR/USD has formed a major top and will sell off thousands of pips. It appears the EUR/USD is mirroring the stock market so the pair should top and reverse in line with the stock market. The 1.4700-1.4800 area looks like a good topping point, but it's just a guess at this point. I'm waiting for a strong reversal day and a five wave decline to get my attention.