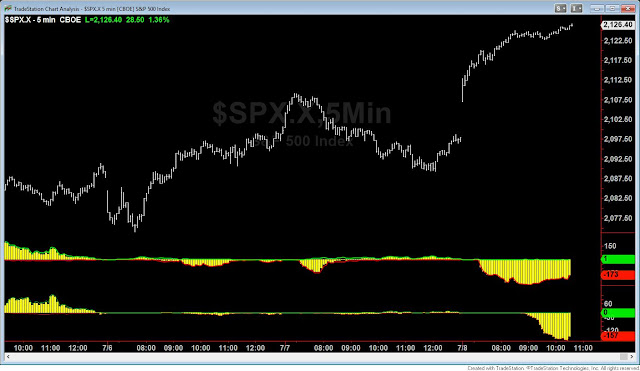 I just wanted to drop a quick note on something I'm seeing in the S&P cash index. You can see my custom indicators at the bottom which tracks signals in all of the S&P 500 stocks. The top indicator has a yellow histogram showing how many stocks are oversold minus stocks overbought, which stands at 173. Although this is a very high number, it can stay oversold for a long period of time. So next, I look at the bottom indicator which tells me how man stocks have CONFIRMED. a bearish reversal minus those with bullish reversals.  You can see that there are 157 more confirmed bearish stocks. This is an extremely high number and predicts a pullback in the S&P very soon, either later today or early next week. This is on a 5min chart so the decline may only be 10 points or so, but if bigger timeframes start showing me bearish confirmations then this could be predicting a much larger reversal is coming.

This is a wild pair and the recent decline and bottoming attempt is worth adding another 1/3 position long at market (1.7982).  Here is the original trade setup here. 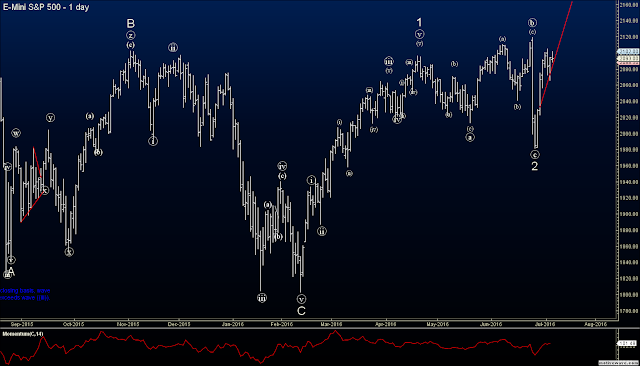 On the daily chart, my projected forecast has played out as expected. And on the intraday charts, my sell signal for 20+ points also materialized. But now I have no signals or bias as the market is at a fork in the road at current levels. Staying under 2120 keeps a bearish outlook on the table, but a break above 2120 opens the door for Minor wave 3 to run significantly higher. I'm neutral until the market makes a decisive move from here. 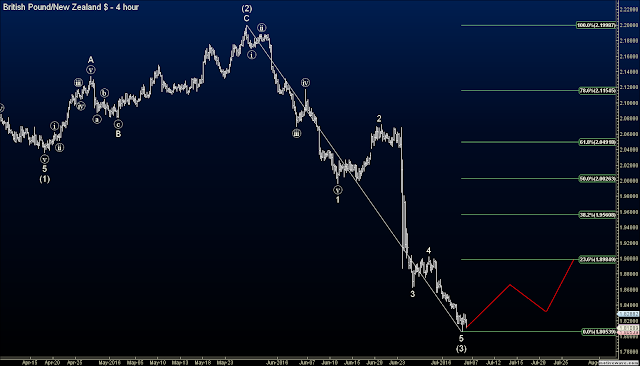 The pound has been pounded the past couple weeks as a result of Brexit but I have been watching buy signals and confirmations over the past week.  I exercised patience with these signals since I wanted the dust to settle a bit on the whole Brexit thing first before I try to get long a pound pair.  Wave structure shows a very mature Intermediate wave (3) unfolding.  You can see that Minor wave 3 contained the sharp selloff after the Brexit vote, and although it has continued lower the following week or so, it has done so in a choppy and weak manner.  This is indicative of a weakening trend, and a 5th wave nearing completion.  I also anticipate that because of this structure, when the pound reverses higher, it will be a very fast and sharp affair.
According to FXCM's sentiment index, the retail side of the trade is heavily long the pound in general.  So that does not support an attempt on my part to get long the GBPUSD.  Instead, I will look to the pound crosses with buy signals confirmed.  I see that in GBPCAD and GBPNZD.  Although retail sentiment is firmly bullish on the pound, it is extremely bearish on the NZDUSD.  As a nice contrarian indicator, this means the NZDUSD will likely continue higher.  So these two sentiment indications should cancel each other out on the cross GBPNZD.  So I can now just focus on my custom indicators and the confirmed buy signal which is in place right now.  I want to put in a 1/3 long position on a big trade.  I don't want a stop loss in place because I want the trade to work, but I will put in a catastrophic stop loss in at 1.7200 and will quickly tighten that significantly once the trade moves in my favor.  Here's the setup:
Long GBPNZD at market (currently 1.8135)
Profit target is 1.8900
Catastrophic stop loss (optional) 1.7200


PLEASE NOTE: THIS IS AN ELLIOTT WAVE BLOG EXPRESSING AN OPINION AND IN NO WAY GUARANTEES OR IMPLIES ANY PROFIT OR GAIN. TRADE AT YOUR OWN RISK.
1 comment:
Newer Posts Older Posts Home
Subscribe to: Posts (Atom)