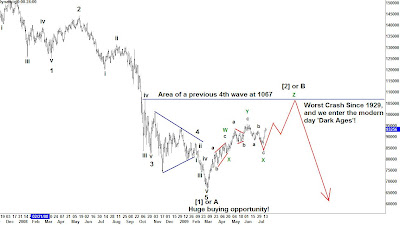 The S&P rallied before I thought it would, but that's no surprise as the entire rally over the past few months has barely taken a breather. This is typical of wave 2 rallies. It also makes it less likely that the alternate count is correct, which has this rally as a B wave. The projected path on the daily chart which I made a couple weeks ago is playing out. I expect a major top in the S&P between 1000-1100. Right now I am flat the stock market and will wait for signs of that major top before I consider re-entering the market. I play short term swings, but going heavily short will not happen until I believe wave 2 is over. I will update this blog once I start seeing strong evidence that wave 3 down is about to begin. It will bring about the shorting opportunity of a lifetime, and could make a savvy trader 500-600 S&P points in just a few months.

(Click on the chart above to make it bigger so you can see the wave count)
2 comments:

No time to get into detail; but 930 S&P futures (935 cash S&P) needs to hold or the immediate bearish case is most likely broken. A break of that level will make the entire fall the past couple weeks a 3 wave drop and most likely complete. I will not be short at all on a rise above 930 S&P futures. As long as it stays beneath this level, the bearish case is in full force.
No comments:
Newer Posts Older Posts Home
Subscribe to: Posts (Atom)