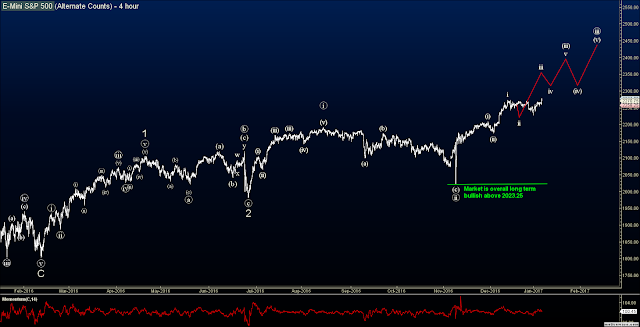 The market has more or less traced out as I have projected.  The key level for the long term bullish view is the US Election Day reversal and rally from 2023.25.  The market appears to be unfolding in a series of 1 and 2 waves which is very bullish.  Keeping the recent swing lows intact bolsters the bullish view as well.  In addition, the Donald Trump bullish US economic boost hope is still in place, and despite recent overbought indicators, the market has only paused and then resumed its rally.  Again, this fits well with the wave count above. 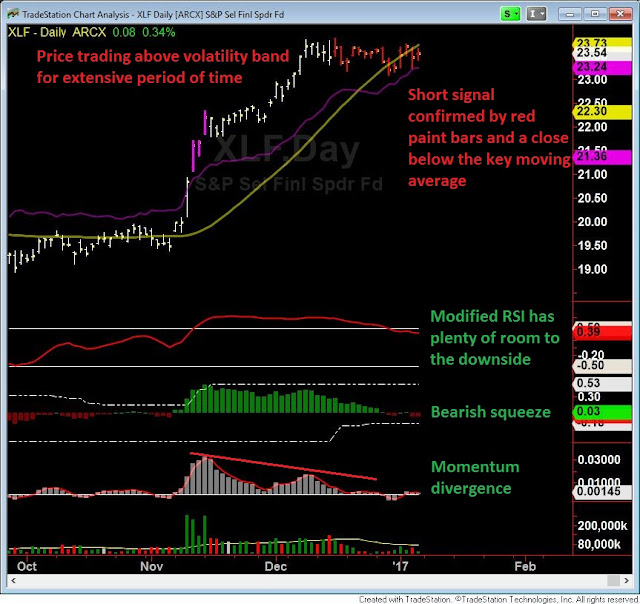 In looking at the stock market sector breakdown, I see that sectors such as Biotech and Health Care are trending up quite sharply.  On the other hand, Financials and Gold Miners are losing some steam.  I want to focus on Financials primarily for now, and specifically the XLF.  There are several bearish signals in place that has resulted in me getting short numerous financial stocks such as Morgan Stanley, Bank of America and Capital One to name a few.

Notice in the chart above the magenta paint bar which marks when the stock has moved too far too fast, and it's confirmed by the green histogram below as it breached the upper moving average plotted with white dashes.  The stock was also well above its volatility band (magenta average below price).  The stock later stalled, and a bearish signal initiated with the red paint bars, which was later confirmed by a close below a key moving average.  In addition, you will notice at the bottom that the modified RSI has been running overbought for a long time and is now trending down with plenty of room to run, and there is a bearish squeeze on the histogram, accompanied by bearish divergence on my momentum indicator.  This sector is extremely bearish from a technical standpoint, so I am looking to continue getting short individual stocks, or even the sector ETF as a whole, over the upcoming weeks.


PLEASE NOTE: THIS IS AN ELLIOTT WAVE BLOG EXPRESSING AN OPINION AND IN NO WAY GUARANTEES OR IMPLIES ANY PROFIT OR GAIN. TRADE AT YOUR OWN RISK.