Strange Day Today, How do we Weigh the Evidence? 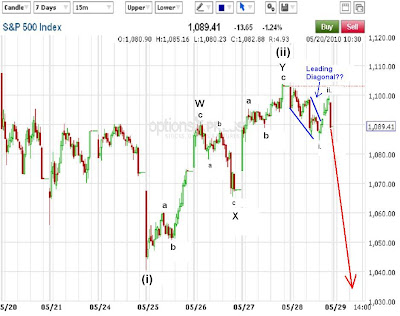 So today was a strange day since I expected buyers to push this market higher into the long weekend on light volume so money managers could inflate their books for an otherwise horrible month for stocks. But that didn't happen obviously. Instead, once the Spain downgrade news hit the floor the market tanked, rebounded a bit which nearly got the NDX to a new high before violently selling off into the close near the lows on the day. The sharp selloffs late in the day ARE in fact characteristic of what we can expect from a wave (iii) of 3 of [3] or C. Plus the wave structure counts complete very easily at this juncture with a WXY double zig-zag correction composing wave (ii). Whether it complete or not, you can easily see that this rally looks very labored, and is not unfolding impulsively. So I have high confidence that this rally starting this week is just a correction.

With that said, there are a few problems concluding with high confidence that wave (ii) is complete:

1) Today was the end of a horrible month for stocks, so perhaps anyone who made a little gain on this recent wave (ii) rally would want to lock those gains in for the month of May on their books. This would result in another buying spree early next week when the new month starts.

2) There's a 3 day weekend and investors are still spooked, and with the Spain news hitting the wires late in the day, no one wanted to be caught fully long on a 3 day weekend where more news can come out and wipe people out next week. This is also evidenced by the VIX which surged 8% on the day, suggesting that investors are still nervous and buying put options to protect positions over the weekend. But if nothing happens over the 3 day weekend, it may mean the buying spree continues next week into at least the 1105-1120 range I cited yesterday.

3) The market declined in a series of 3 wave drops this afternoon, suggesting this is just a correction. I looked at some of the other main indices to try and see if any made a new high, which would create a divergence and therefore explain why the S&P and Dow did not make new highs after their corrective looking decline. But only the Nasdaq 100 came close to making a new high, falling less than a point short of that new high. It's possible to count the decline as a "leading diagonal", but that is unlikely to be the structure that kicks of a wave 3 at multiple degrees.

4) Despite the Friday before a holiday weekend, volume was fairly strong considering the circumstances. So how does that factor in? Unfortunately I'm not sure, but I thought it was interesting that there was some volume on the board today.

Unfortunately there are too many "X factors" and inconsistencies in the overall outlook at this point to conclude with high certainty that wave (ii) has ended. But we should know soon enough on Tuesday when trading resumes. A wave (iii) of 3 of [3] or C should be unmistakeable in structure as it should practically be a straight line down. Anything short of that would most likely mean this was just the start of a mild correction before we make new highs into the 1105-1120 zone I mentioned yesterday. It would take a break of 1066 in the S&P cash index to significantly strengthen the evidence that wave (iii) of 3 of [3] or C is underway. Until then, I'll expect the market to climb higher where I'll add to my short positions on the way up with my stops placed just above 1174.